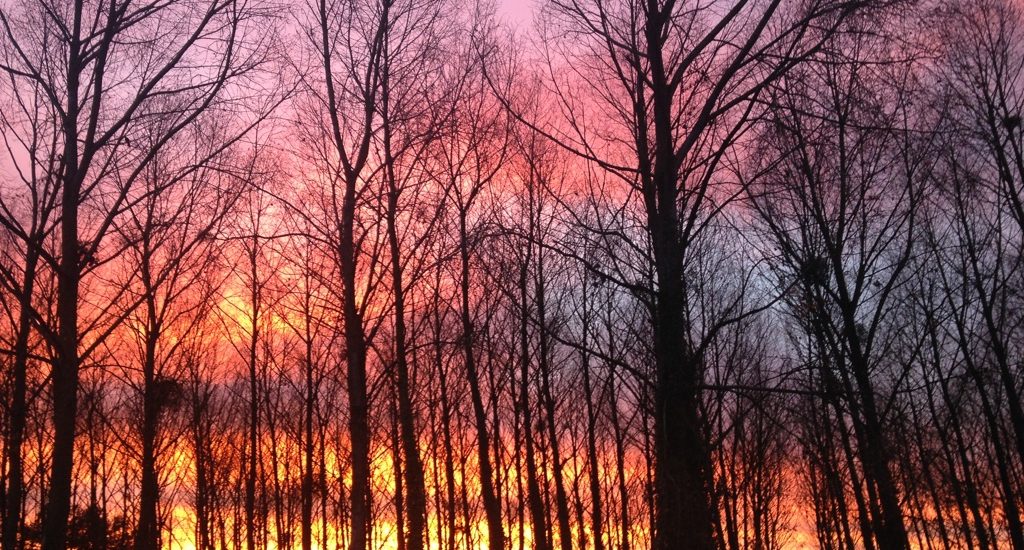 I am filled with a bit of sadness as I write this week, as my two hundred and seventy-one poplar trees are being cut down outside right now. The big saw is buzzing and the sound of the giant trees falling with a deafening crash is upsetting. I have to remind myself that they are fulfilling their destiny, as they were planted as a cash crop twenty-five years ago, and the harvesting will bring me much-needed funds to help complete the renovation of my old farmhouse. Still, they are living entities and it pains me that I will never again hear the wind rustle through thousands of leaves or watch the sunset behind them.

Some of you may know that I worked in the States as a Landscape designer, so all is not lost. I will now have three acres to design and perhaps another crop to grow. I get a tax break if I grow another harvestable crop, so I am currently contemplating what that might be.  The rest of the land I would like to let return to a mixed forest; with oak, birch, walnut, and holly. This will bring the wild animals and birds, and that will very satisfying.

Last week on Assumption day, the 15th of August, I attended the ‘Fete de Chausse’ in the nearby village of  Vernoil le Fourrier. It is the opening of the hunt, and it was attended by hundreds of enthusiasts. 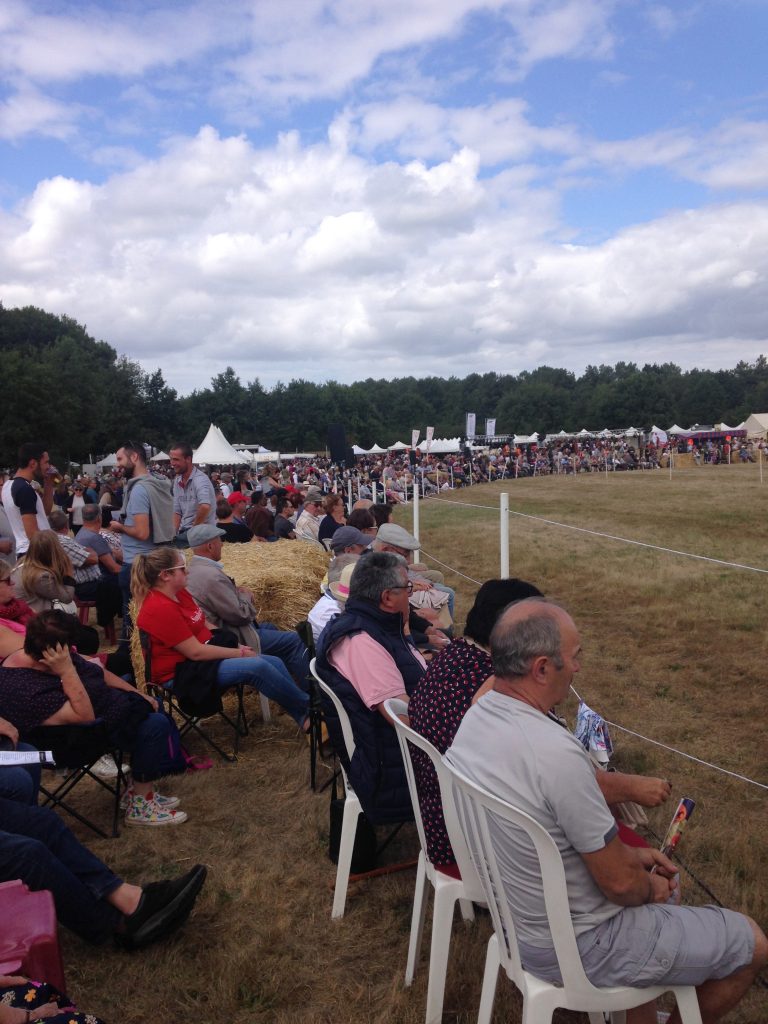 There were folks dressed in their finest hunting attire on beautiful horses, and many varieties of hunting dogs were there as well. Here are some of the many races of hunting dogs that are highly revered here in France. Don’t worry. They are very well treated here. 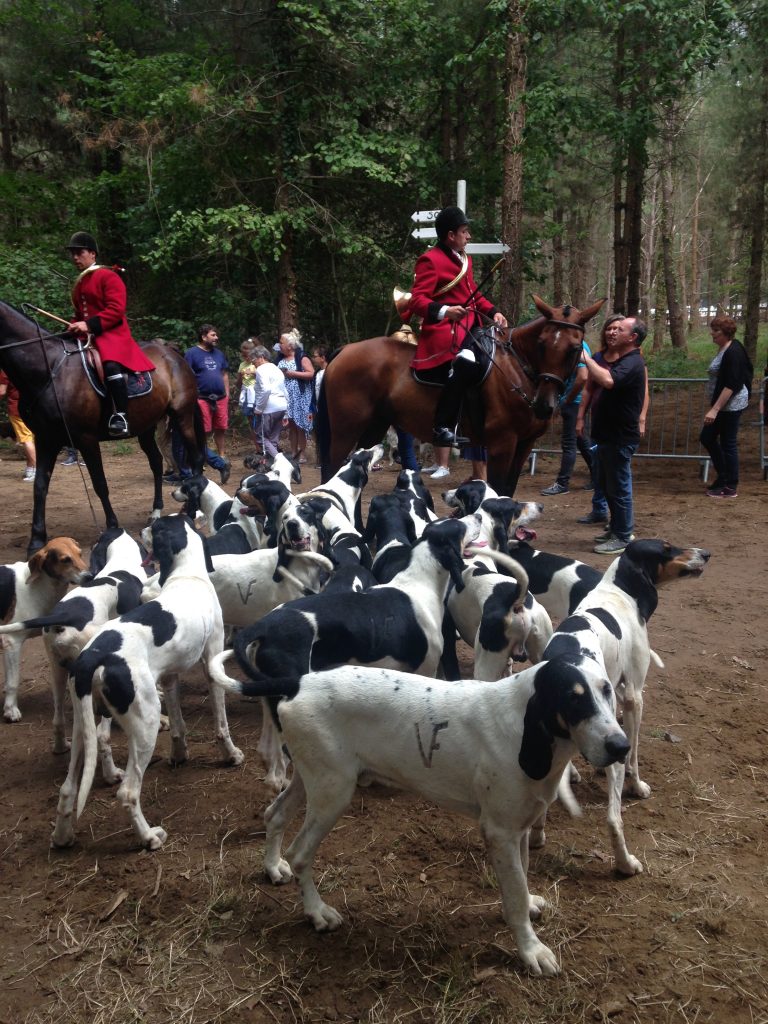 By the way, the dogs have not been branded with a hot iron. They meticulously hand-cut the family initials so that if a dog gets lost on the hunt, they can be easily returned to their owners. 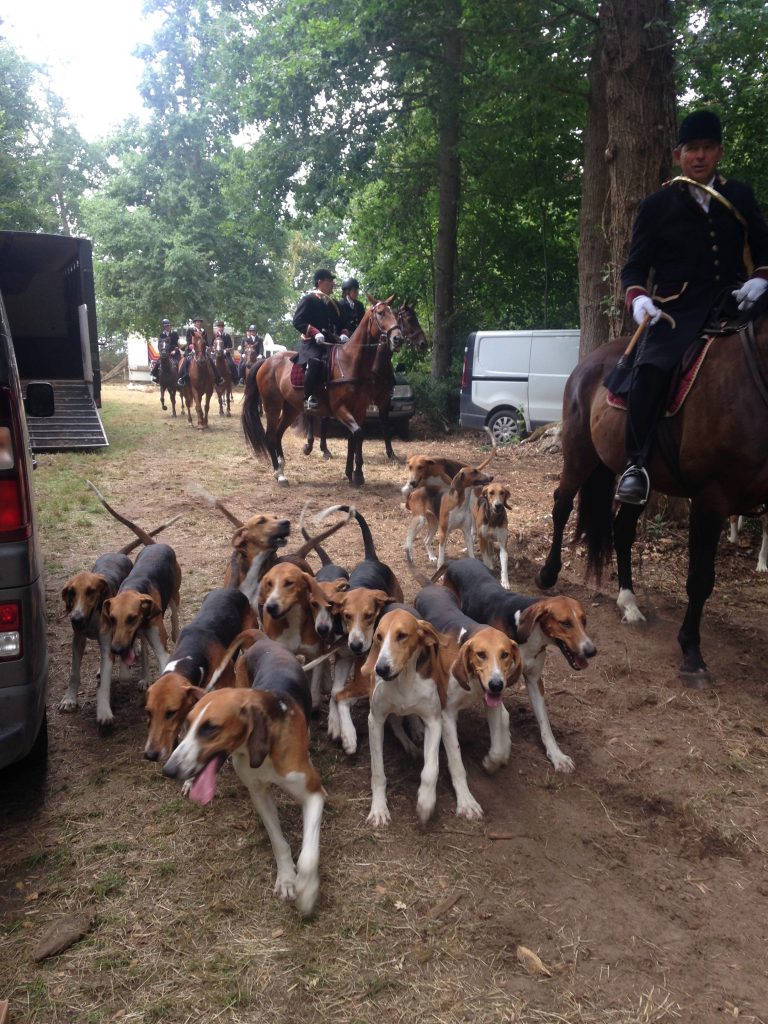 My friend Jenny wanted to take all of the dogs home with her. 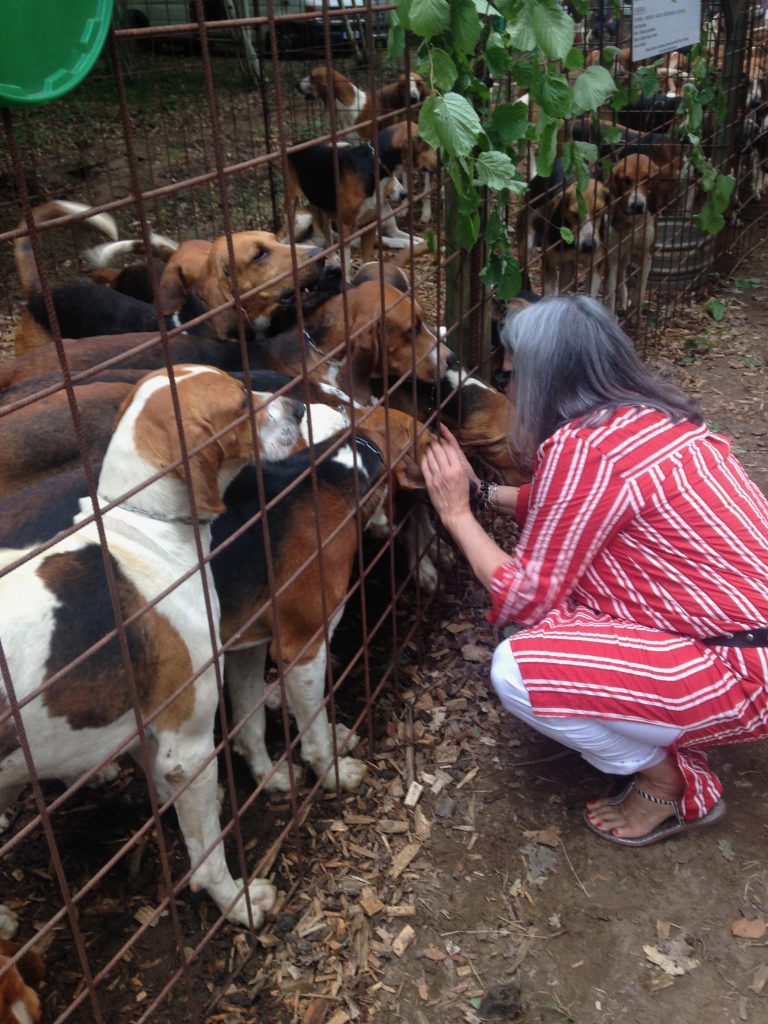 Look at this guy’s adorable face! 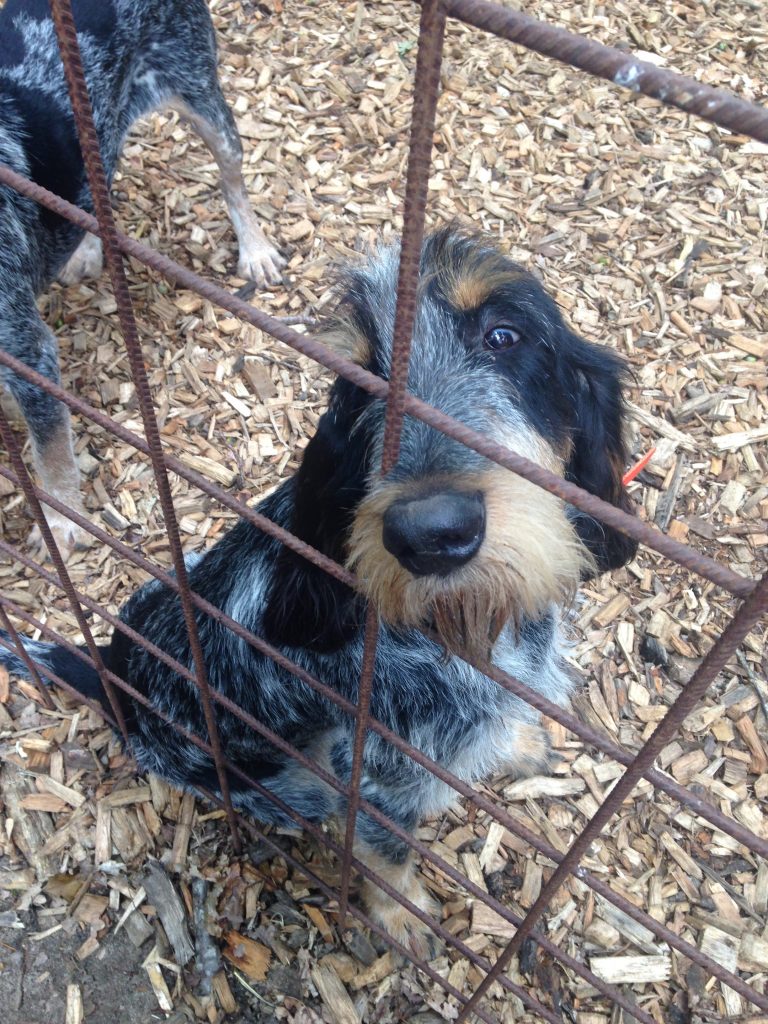 Here’s a fellow who makes horseshoes from scratch! 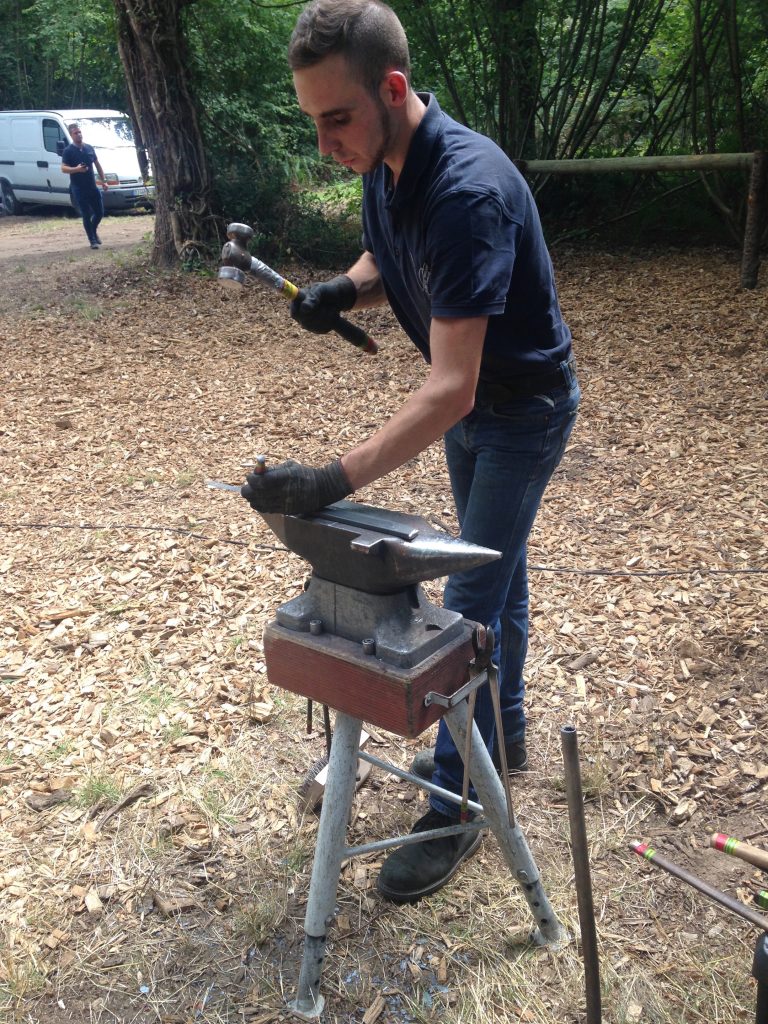 I attended this event with my new friends Jean-Louis and Jenny. She is an American from Los Angeles who moved here seven years ago. Jean-Louis is French and a hunter, as are most folks in France. Here we are at the event in line for a wonderful Paella lunch. 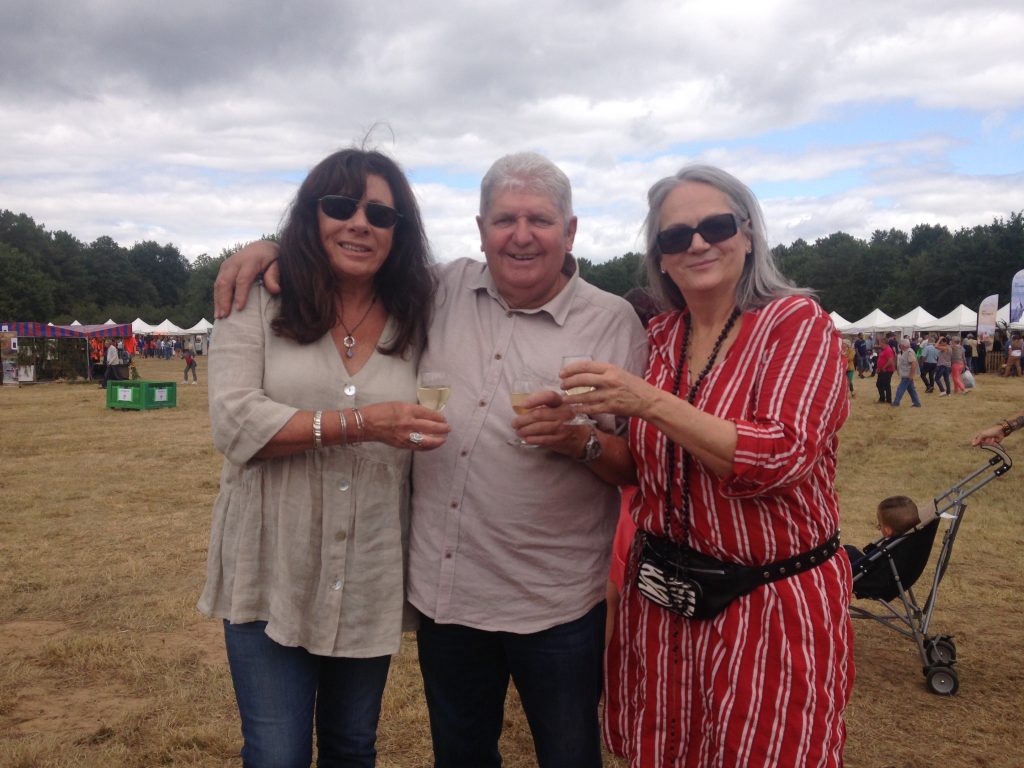 He hunts for Roe deer and wild boar. 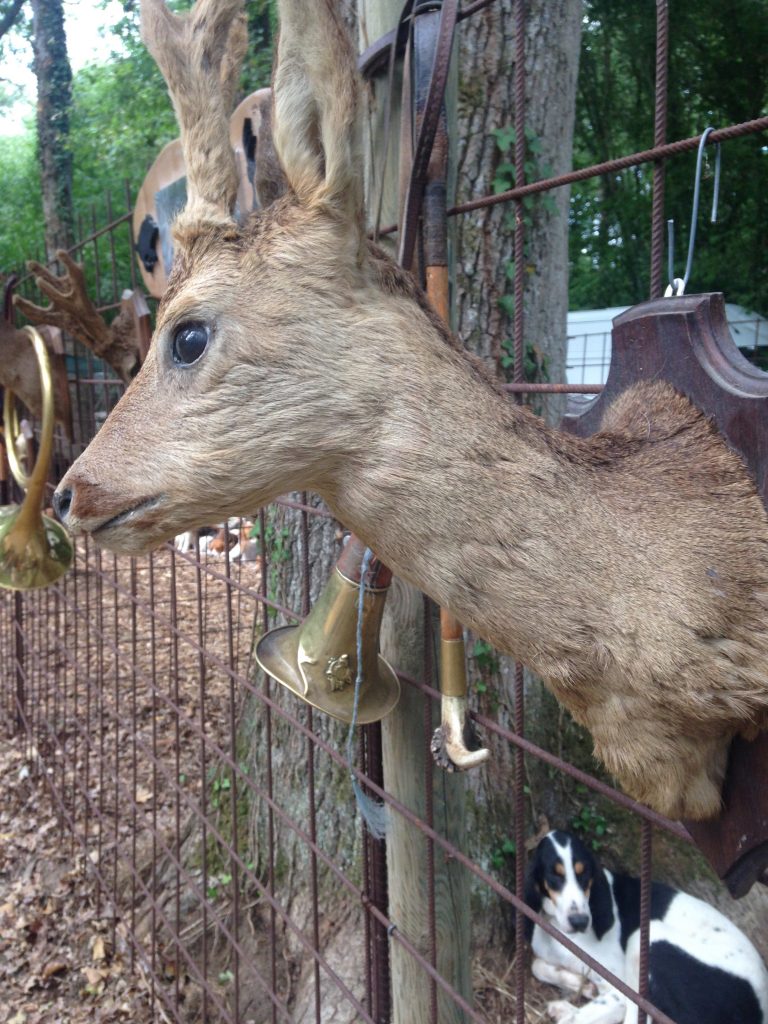 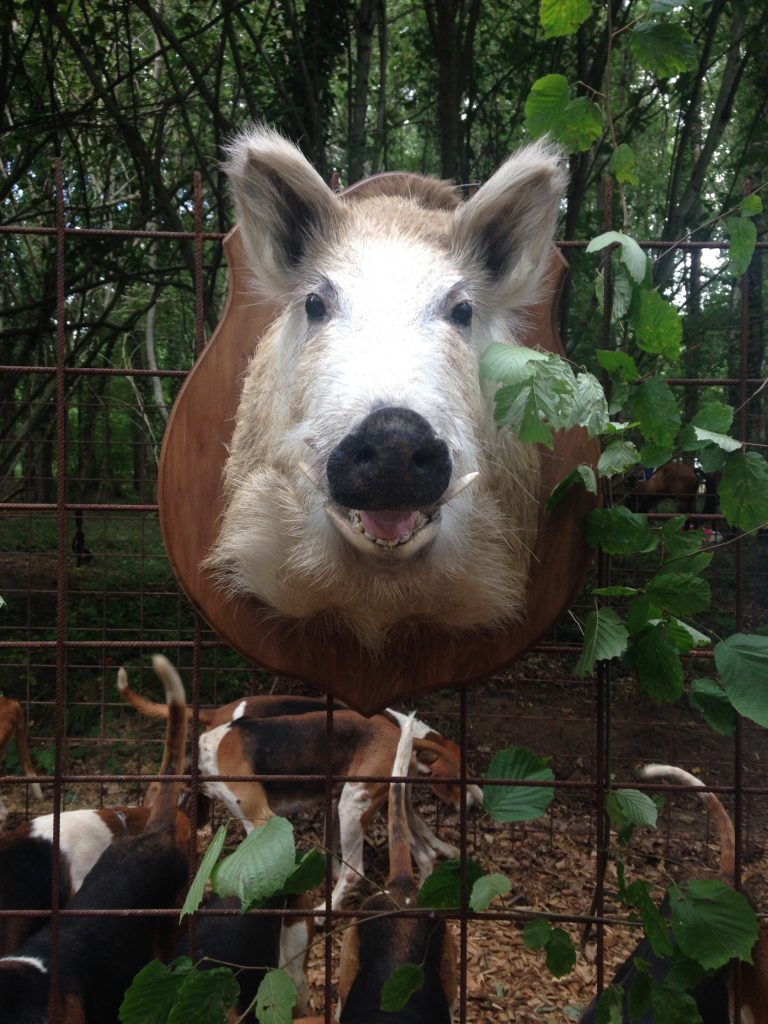 Whatever you think about hunting, they take it very seriously here in France. I have come to accept the practice since I moved here because they do eat the animals they hunt, and I am not a vegetarian. What I will never support is trophy killing for sport or the killing of elephants for ivory or for any reason for that matter. And at any rate, whether I like it or not, the tradition is deeply ingrained in this country and I am not going to change that.

Soon the weather will turn crisp and the season will change once again. Smoke will curl out of chimneys and folks will prepare the bounty of the land as stews, roasts, soups, and sausages. The hunt has contributed to France’s grand cuisine for many generations. It has always been as such, and though I will not be packing a rifle any time soon and joining them on the hunt, I will enjoy sitting at their tables and sampling their culinary skills.

Until next time, keep enjoying the fine weather and being outside!