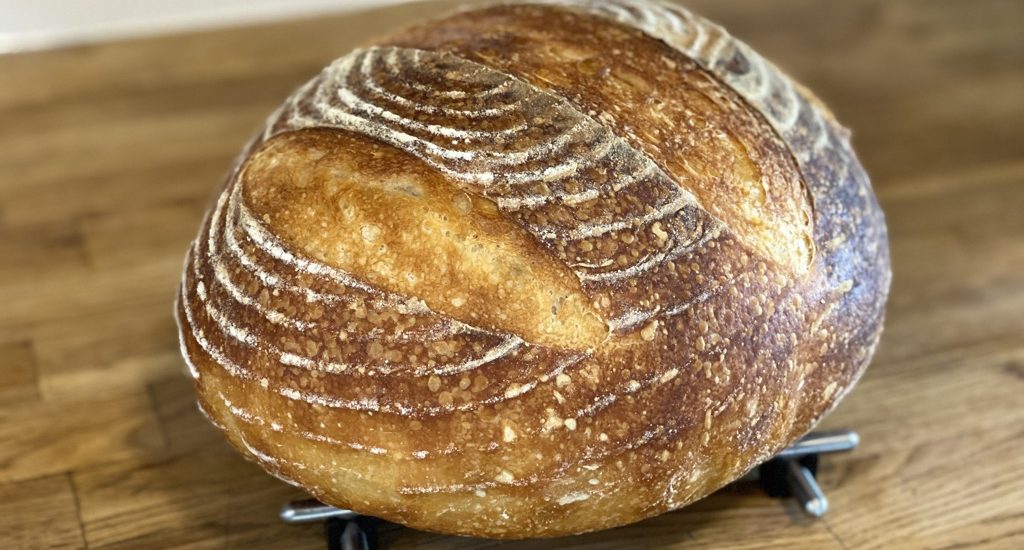 Hello! Gourmet Girl Lindsey here. Have you been making sourdough bread at home just like every other nonessential worker in America? Yeah, me too. I started this process back in December when the pandemic was just a twinkle in Uncle Ben’s eye. Heeding the sage advice of my friend Sarah, I ordered some dried sourdough starter from Carl’s Friends.

Carl Griffith (1920-2000) kept alive this formidable yeast his entire life. His great grandmother ferried it along the Oregon Trail in an actual covered wagon in 1847. Carl would bake his sourdough bread in a dutch oven buried in a fiery hole in the ground at their family homestead. Challenge accepted Carl! Do I hear a recipe contender for the 2nd edition of The Gourmet Girls Go Camping Cookbook?!

Carl’s sourdough starter is so vigorous and stable it became highly sought after. He would give it away to his friends, family, and anyone else who asked for it. I could go on all day about Carl and his adorable friends, but really, this is about Children of the Carl. His little yeast babies that have spread the globe like wildfire.

Unfortunately by the looks of the message at the bottom of Carl’s Friends website (which was probably created with GeoCities in 1994), they’ve received too many requests to fill. Probably because of bored, quarantined hipsters like me, writing blog posts just like this. But not to worry. I can send you some myself. Because let’s be real, all of us in the Oregon Trail Generation were born to carry on this legacy (and also die of dysentery). Just shoot us an email with your address and I’ll send out some dried starter you can revive with flour, water, patience and these simple instructions.

If you’re about to yammer on about how gluten is the devil, I need you to realize one thing. The bread you’ve been buying at the store is not fermented, and that means it sucks. If you ferment dough properly the yeast breaks down everything your precious little snoflake guts have a hard time with. So unless you’ve actually been diagnosed with celiac disease, fermented bread will not screw you up. Michael Pollan explains it way better than I can in episode 3 of his Netflix series Cooked. In fact, just watch the whole series. It’s amazing. Especially the part about the cheese making microbiologist nun. But I digress…

Place the starter in a large jar and let it get to room temperature. Add the water and flour. Stir vigorously. Don’t worry about lumps, they will clear up in the fermentation. After mixing, clear one side of the jar with a spatula and mark the level on the jar. Screw the lid on only half way to keep in the moisture. If your kitchen is cool, under 70˚F, put the jar in a warm place. On top of the fridge or in an oven that’s off. If it doesn’t double in size in four(ish) hours just repeat the process and it will become more active.

A good looking active starter will be visibly bubbly through the sides of the glass jar and on the surface. It will be stringy, blobby, gloopy, sticky, generally unappetizing, and it will float. Yep, float. Take a small spoonful and drop it in a glass of water. Once it passes this float test, it’s time to make the dough.

If you want to dig deeper on starter care check out this bread cowboy at Breadtopia (who doesn’t seem to measure anything ever).

Here’s some great uses for all that leftover sourdough starter from The Perfect Loaf.

Place the starter and water in a large mixing bowl and whisk together with a fork. You should end up with something that looks like thin watery milk. Next mix in the salt and stir to dissolve. Then use a spatula or your hands to mix in the flour. Once it begins to act more like a dough, start pressing the flour and water into each other until the mixture starts to stick to itself more than your spatula.

Cover with a damp tea towel and let sit for one hour. This gives the flour time to fully absorb the water before fermentation. This is the poor man’s version of the autolyse. A proper autolyse breaks up the mixing process into various stages of adding ingredients and resting. If you’re having trouble getting a good rise, dive into the autolyse. However, for most home bakers the autolyse won’t make too much of a difference.

Stretching and folding the dough helps strengthen the gluten and creates structure that traps gas bubbles during fermentation. Wet your hands to keep the dough from sticking too much, then scrape around the sides of the bowl to get the dough into a ball shape. Think of your dough ball as having four sides. Pull one side up stretching to the end of its elasticity, then fold it over itself. Repeat on the other three sides.

If your dough doesn’t sit up and hold a shape very well after doing this once, let it rest another hour and repeat.

The goal here is to get your dough to roughly double in size. It will probably take about 8 hours. However, this amount of time can vary greatly depending on the humidity and temperature of your kitchen, as well as the vigor of your starter. You don’t want to let it go too far as it will have no rise left for proving and baking. Cover it with that damp tea towel once again and check in on it every couple of hours.

Turn the dough out onto a cutting board that’s been lightly dusted with half rice flour and half all-purpose flour. Adding rice flour keeps the dough from sticking. Stretch and fold as before on all four sides. Then flip the dough upside down and begin to scoop around the bottom. Tuck the bottom underneath itself with the scraper to create surface tension (see pictures).

Scoop the dough up and place it upside down (so the seam is facing up) in your dusted proving basket. A floured tea towel in a bowl works for this as well, but the proving basket is a dream. Again using half rice flour and half all-purpose will keep the dough from sticking.

Cover and place in the refrigerator overnight.

After an evening in the fridge take out your dough so it gets back up to room temperature while the oven to preheats to 500˚F. Remove the dough from the proving basket by placing a piece of parchment paper over the proving basket and a plate on top of the parchment. Flip over and remove the basket. Score with a serrated knife or razor blade however you’d like.

Once the oven is up to 500˚F reduce heat to 450˚F and bake with lid on for 20-25. Remove lid and bake for an additional 25-30 minutes or until you’ve got a nice golden brown on the outside. Store your bread in a paper bag cut side down for a couple of days. Then transfer to a plastic bag and refrigerate before it begins to harden.