Gourmet Girl Gail here writing from Ocean Mesa, overlooking the Pacific. Even though it’s a mere 22 miles north of Santa Barbara, it feels like oceans away. And although my apartment in Santa Barbara overlooks the city and the sea, I’ll take any excuse to get away from the interruptions of everyday life in my own habitat. In times before my Roadtrek days, I would often escape to a B&B along the coast to read a client’s manuscript. This time I’m on a writing assignment having to do with injecting dialogue into a Dystopian story. Wish me luck! 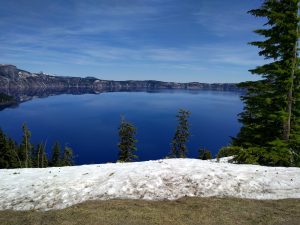 In the meantime, on our recent trip to Oregon, we made a side trip to Crater Lake in the south central part of the state. I’ve been to Crater Lake a few times and have many fond memories of the deep blue lake, which, with a maximum depth of 1,932 feet, is the deepest among all lakes in the U.S. and seventy worldwide. According to the brochure handed to us by a national park’s person, Crater Lake was established in 1902 after 17 years of lobbying by William Gladstone Steele. He had learned of Crater Lake as a Kansas schoolboy reading a newspaper used to wrap his lunch. It predates the creation of the National Park Service 14 years later.

Two of my fondest memories of this remarkable blue lake involve a sibling reunion and taking my parents on a trip up the coast to the lake. The reunion was held in Prospect, Oregon, about half an hour’s drive up to the national park. We all stayed at the historical Prospect Hotel, which first opened to guests visiting Crater Lake in 1892. Teddy Roosevelt loved the place. So did John Muir, Zane Grey, Jack London, and Herbert Hoover. I would love to have been a fly on the wall during their visits!

In July 1999, my parents flew from the east coast to Los Angeles. I picked them up at my brother’s apartment in Sherman Oaks, in my brand new Camry. We spent four days in Santa Barbara before leaving and traveled 26 miles through the redwood trees along the Avenue of the Giants. I found an entry in a photo album (no digital photos in 1999!) that my mom put together. “Crater Lake is beyond anyone’s imagination. Simply beautiful! . . . Bill (my dad) finally saw Crater Lake after reading about it in a National Geographic magazine 30 years ago.” He had the article folded up in his wallet for all those years! I felt honored to help him realize his dream of seeing Crater’s Lake awesome beauty. 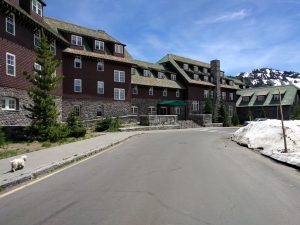 We stayed one night at Crater Lake Lodge, the park’s only hotel. I recall being on the second or third floor facing the lake and taking a bath in the claw foot tub, with a view of the lake as the sun went down. A magical moment indelibly etched in my mind.

On my most recent visit in mid-June, there was still a fair amount of snow, which delighted my little traveling companion Abigail! She especially enjoyed sliding down the snowbanks on her tummy. 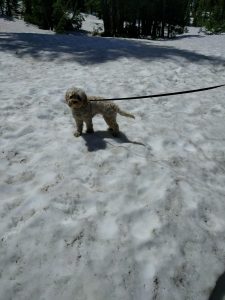 On the way back to Santa Barbara we passed by Mount Shasta, which can be seen on a clear day from Crater Lake, over 100 miles away. 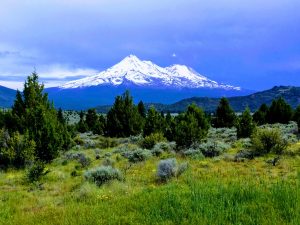 Well, we were pretty much at the end of our journey, although there were a few more adventures along the way! Saving those moments for another blog post.

Take care and enjoy the journey, wherever your travels may take you!