Gourmet Girl Denise here from the Loire River Valley in France. Well, today is a sad day for me. I did not receive my absentee ballot to vote in this election so I am not at all happy! I have never, since I became of age to vote, not voted. I feel strongly about the fact that many women fought hard to get an equal share of the vote in the U.S.A., and that all U.S. citizens should have equal access to vote. So I am counting on all of you to get out there and VOTE! Exercise that hard won privilage!

Meanwhile, today, ironically, I went to renew my visa to be able to stay yet another year here in France. It is my heritage, and my ancestry runs deep here. I was the first generation of my family to be born in the U.S.A. After I successfully renewed my visa, I took all of the  documentation in my possesion of my parents birth in France to the Tribunal in Angers, a beautiful city I might add, to start the process of getting dual citizenship. 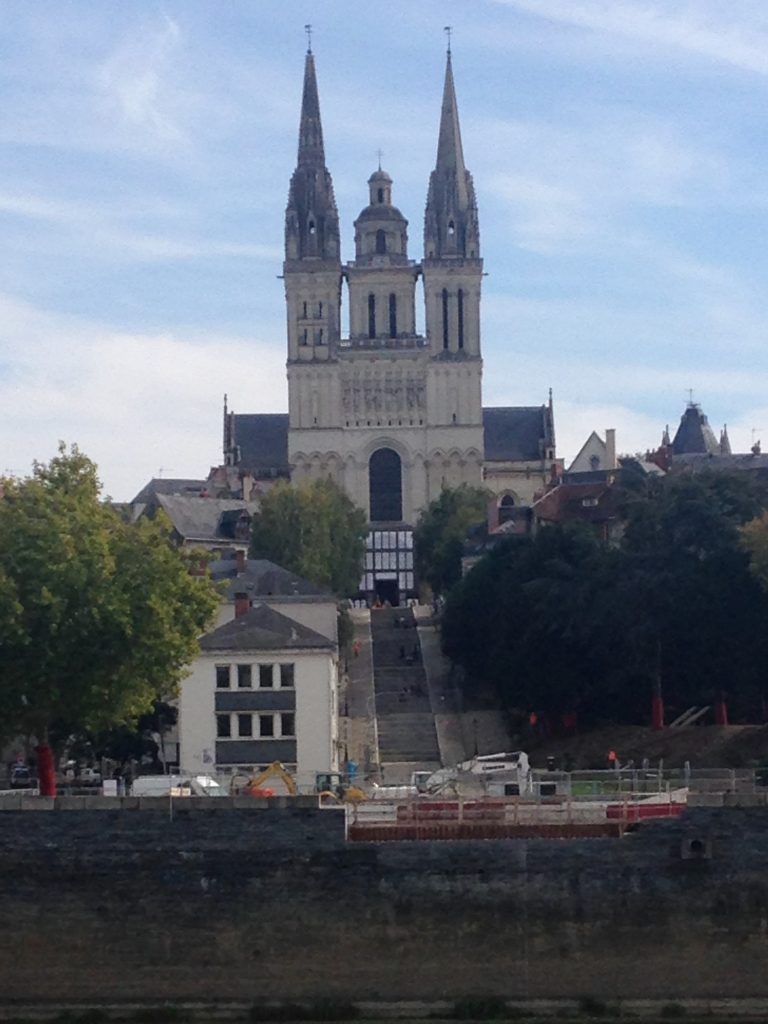 By the time I left my counsellor I was in tears. It isn’t that easy to expat. Especially to France. They make it very difficult. But then so the does the U.S., especially right now under the current Presidency.

What I found surprising was that there are so many English here, especially since Brexit was voted in, who have much less trouble getting citizenship here than I do. And they are coming in droves! Most of northern France is already owned by the English, as they have loved this country dearly for quite some time. I always say that they won the 100 years war, as is evidenced by their numbers here permantly in France. So why am I, a woman of French ancestry, having such a hard time being accepted into this country? Well, that has a lot to do with my parents having given up their French citizenship to become Americans many years ago. But so what? There is a law here called ‘Doite de sang’, meaning ‘right of blood’. And I have it. So I will keep trying and we shall see what happens with this saga in the future. I’ll keep you posted! 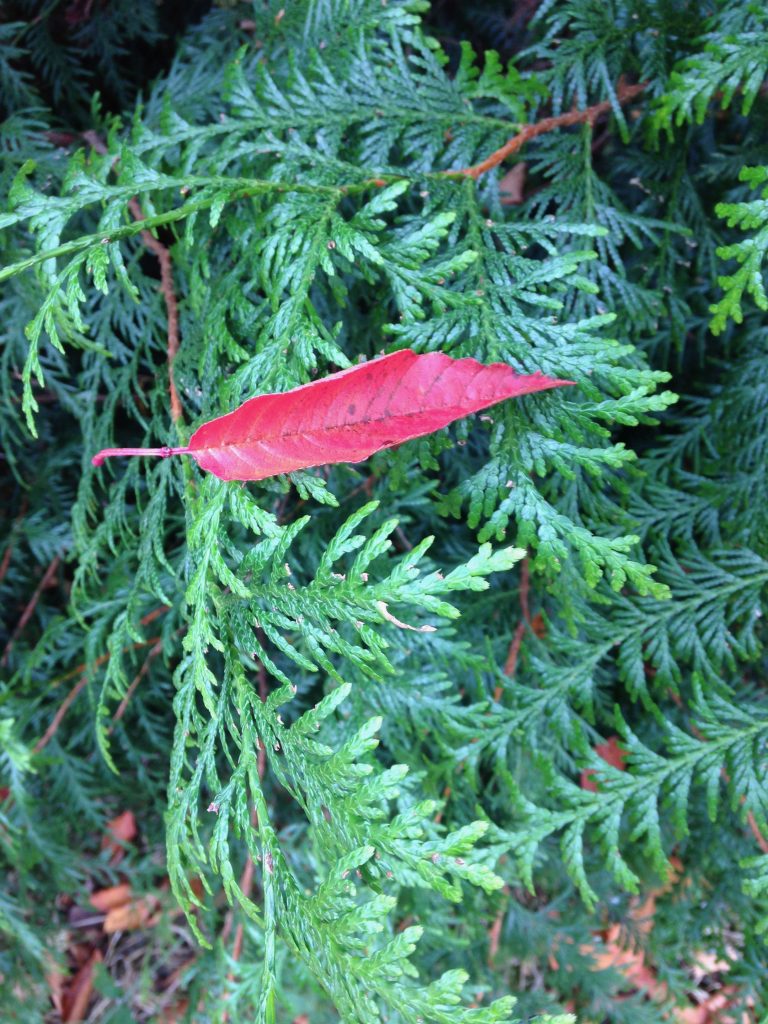 In the meantime fall color is everywhere here. The cooler temperatures and shorter daylight hours have kicked the trees and shrubs into hibernation, and their dying leaves are putting on one last show for this year. Having lived the past 40 plus years in southern California I have to say that I love experiencing the change of seasons. And love all of the rain!! And rivers! There is so much water here! So life abounds. 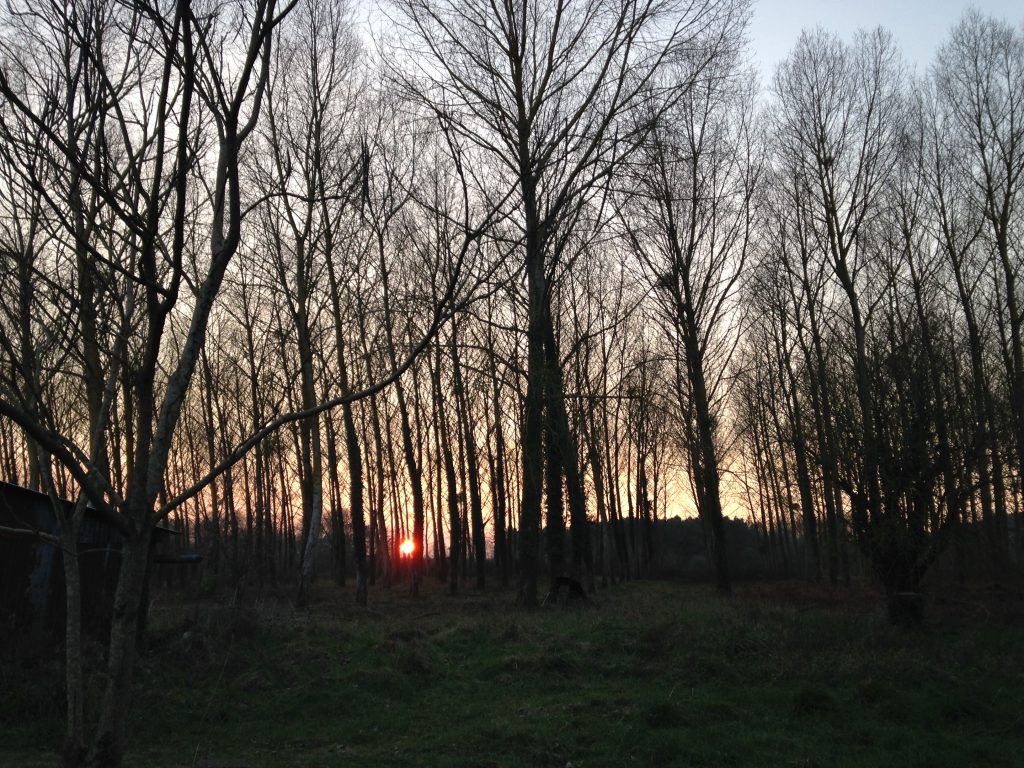 It is also hunting season here, and just the other day on a Sunday, the favorite day to hunt, I heard severak gun shots near my property and ran out to see a hunter on the border of my 2 acres. (Picture above) I wagged my finger at him to let him know he could not come onto my property to hunt, and just then came what I thought was a large hare bounding through the brush. Turns out it was a very small species of deer. It came straight towards me, and then veered off, far away from the bullets, thank God. I will be setting out salt licks all around my property soon and creating a deer sanctuary on my property. And I will be looking up the species to find out who that adorable creature was.

Even though I find hunting somewhat distasteful, I do understand that before there were grocery stores the only way a body could eat was if they went on the hunt. And that tradition is alive and well here in the Loire, as well as Italy and many other European countries. There are lots of deer and boar here, and as long as the animal is respected, used in its’ entirety, and safe hunting practices are used, I have no complaint really. As long as it’s not killed on my turf. I am perhaps more afraid of my cat Milo and I getting hit by a stray bullet than anything else, especially in light of the fact that a mountain biker was killed just a few weeks ago in the mountains by a hunter. The French are known for their long two hour lunches with lots of wine. And then they go out on the hunt. Not ok! I hope soon the government will make some rules about this.

So as the days and nights grow colder, it’s time to snuggle inside next to the fire with a hot cup of tea or whatever strikes your fancy. Here is a pic of my 18th century fire dogs, actually dragons, and my cast iron fire back with an unfortunate hunting scene on it. 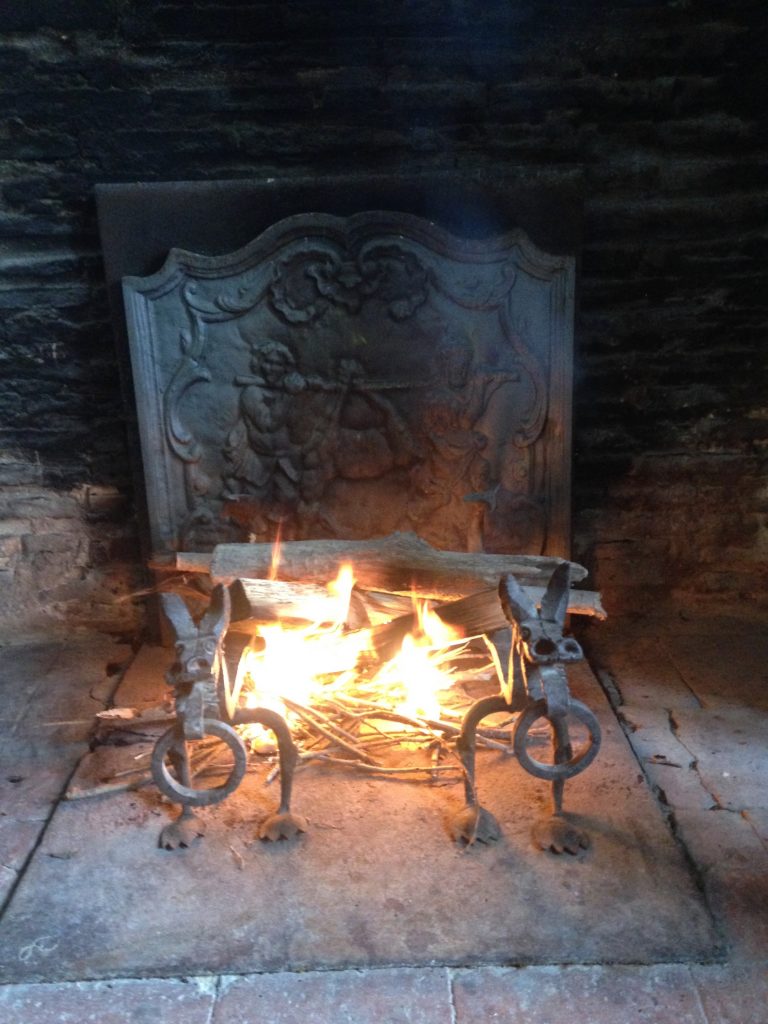 Well, that’s all for now. I wish you all great success in the coming elections, at least those of you who think as I do. Ha!