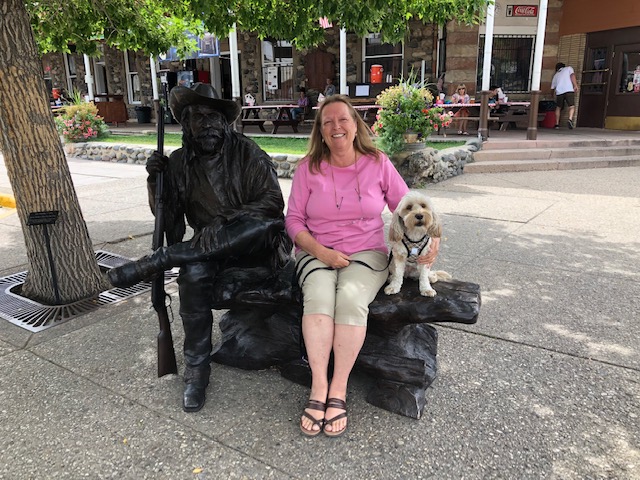 My restless, roaming spirit would not allow me to remain at home very long. — Buffalo Bill

In my last blog post, I shared some of our trip up to Cody, Wyoming, but I didn’t give you the whole adventurous scoop! After driving through Yellowstone, marveling at the sights, and exiting the east entrance, we made our way to Buffalo Bill State Park, about 15 miles outside of Cody. We hooked up our rigs and, lo and behold, I saw a puddle of liquid underneath my rear left tire. I summoned my brother-in-law, Fred, who informed me I had a busted brake line. I thanked my lucky Wyoming stars that it didn’t happen on the beautiful, winding road down from YNP! 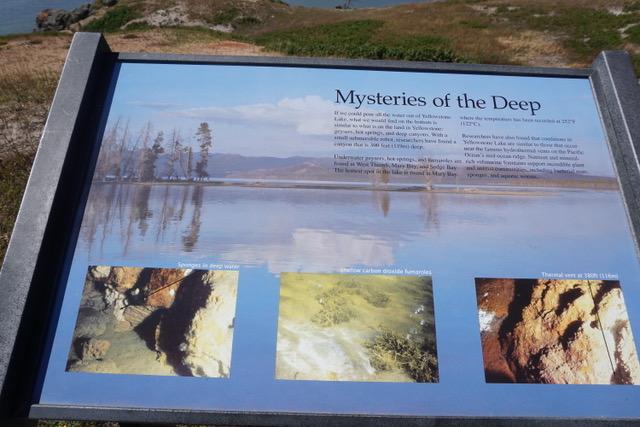 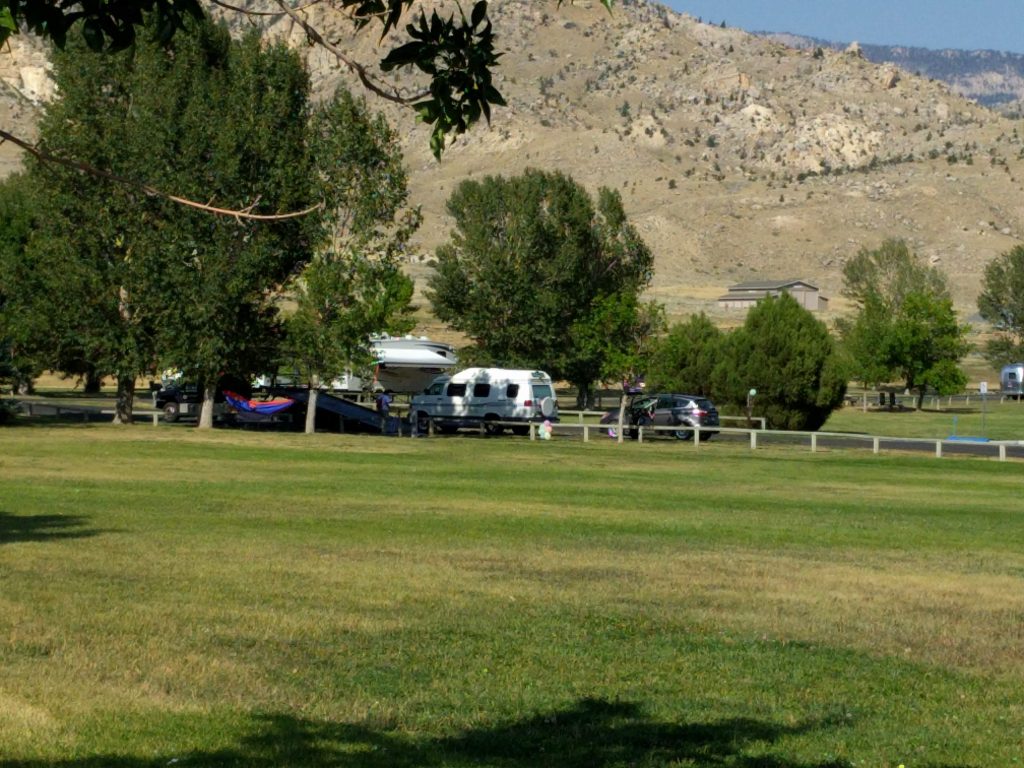 My precious “Gone with the Wind” was whisked away on a flatbed truck for repair. 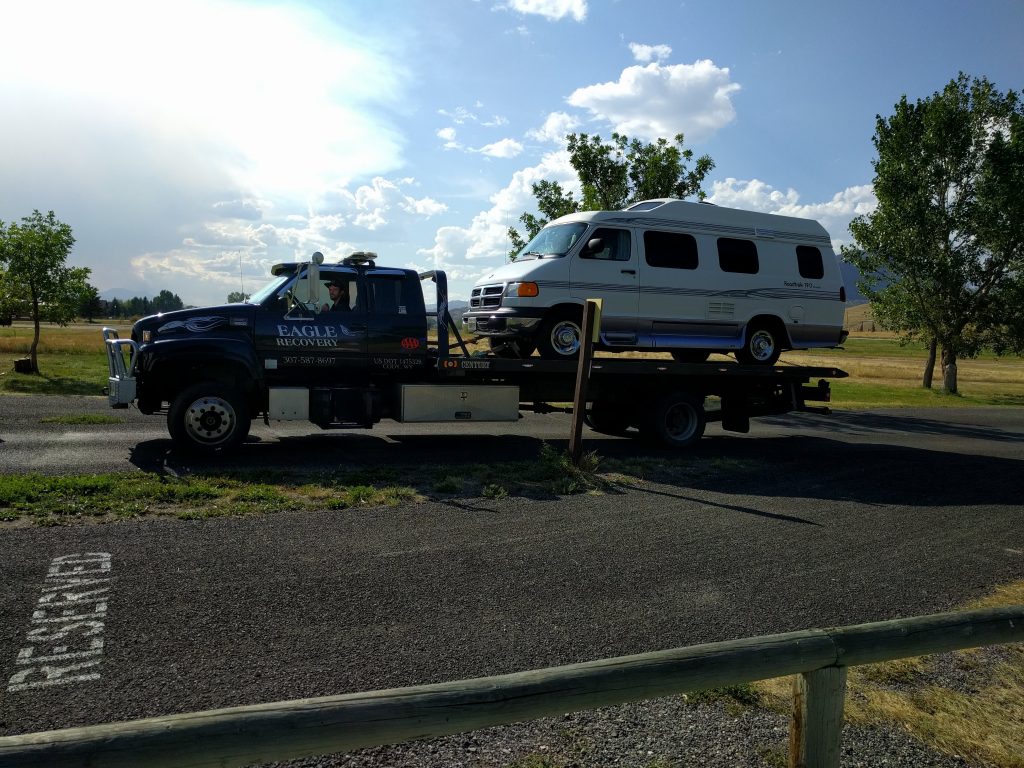 The good news is that we were able to spend more time in Cody and, thankfully, we hadn’t made any campground reservations for the trip back to California. We spent some leisure time in town and visited the Buffalo Bill Center of the West, which is five extraordinary museums in one: Buffalo Bill Museum, the Plains Indians Museum, the Whitney Western Art Museum, the Draper Natural History Museum, and the Cody Firearms Museum, all founded in 1917 by Gertrude Vanderbilt Whitney to preserve the legacy and vision of Col. William F. “Buffalo Bill” Cody. It has been described by The New York Times as “among the nation’s most remarkable museums.” And I would have to agree. 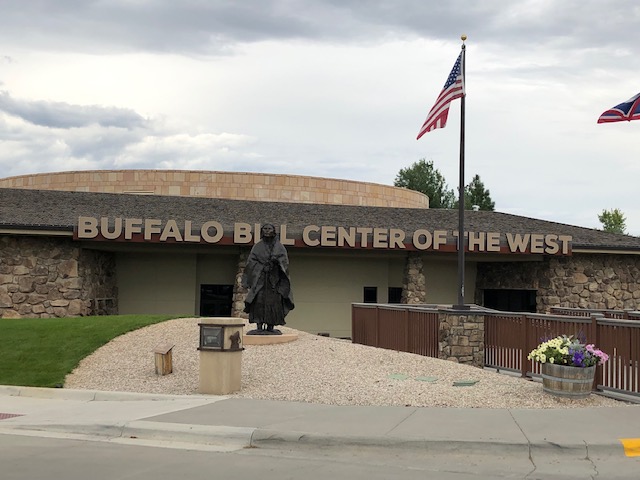 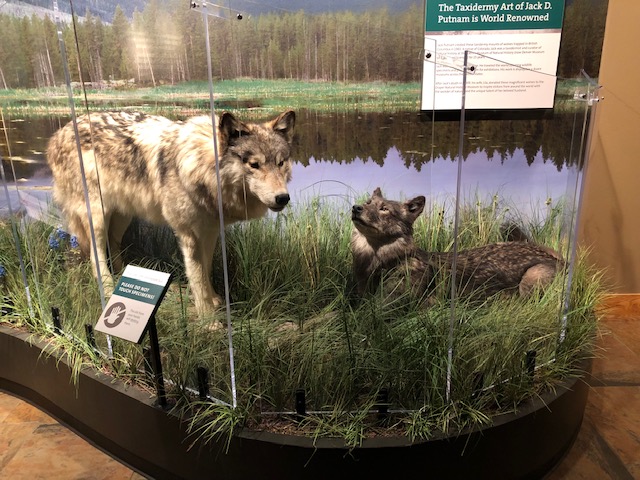 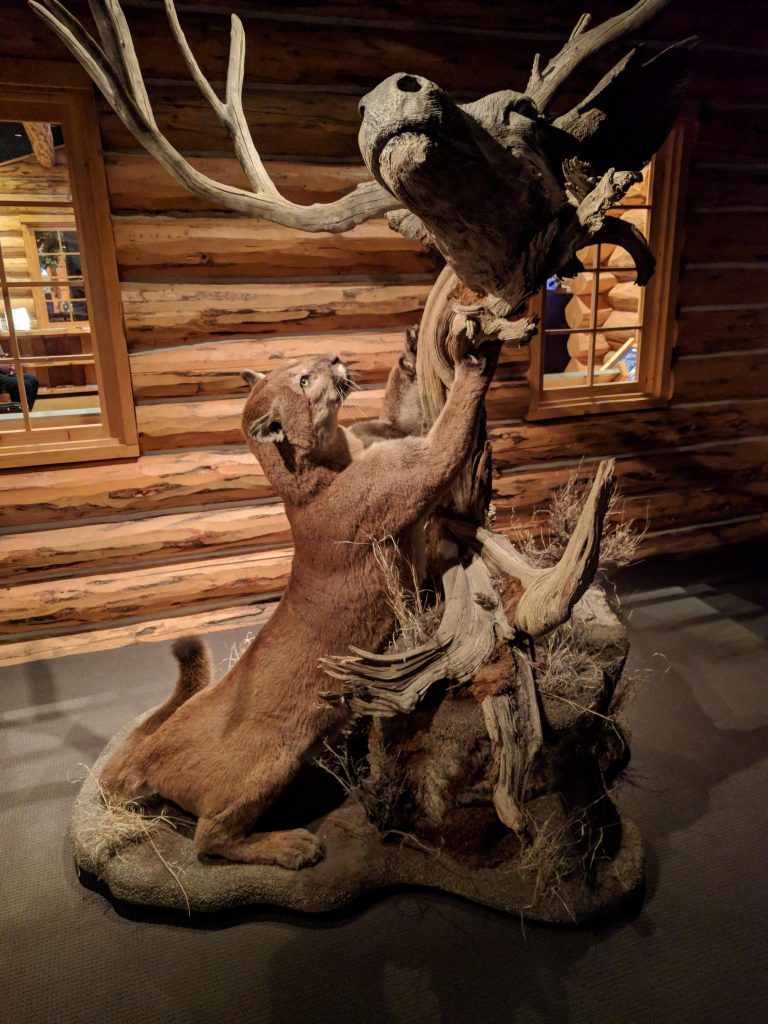 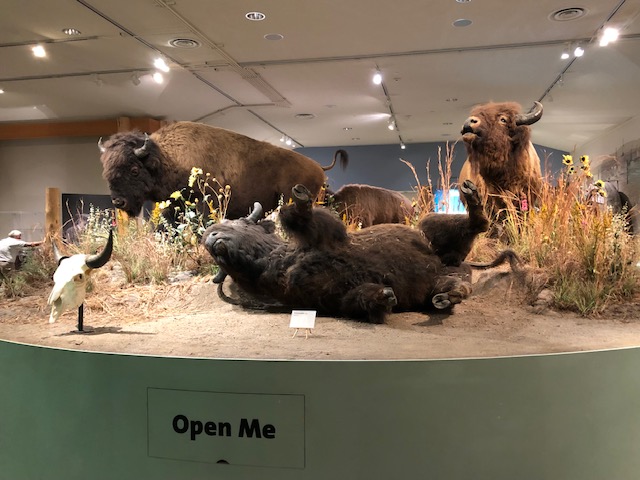 Love this blog about Cody, which isn’t all about Buffalo Bill. There are a  good number of excellent restaurants, shops, the rodeo, and, of course, Buffalo Bill!

We spent an evening in the town of Cody listening to music at the Silver Dollar. Fred (in the green cap) had played several times with Tom and Kathy Walker, a local duo. We were fortunate to catch one of his last performances before he and my sister left their volunteer positions at Buffalo Bill State Park and headed back to Vermont. This was their first gig as volunteers and now they’re hooked! They will soon be selling their house in VT, buying a bigger rig, and volunteering at campgrounds around the country full-time. 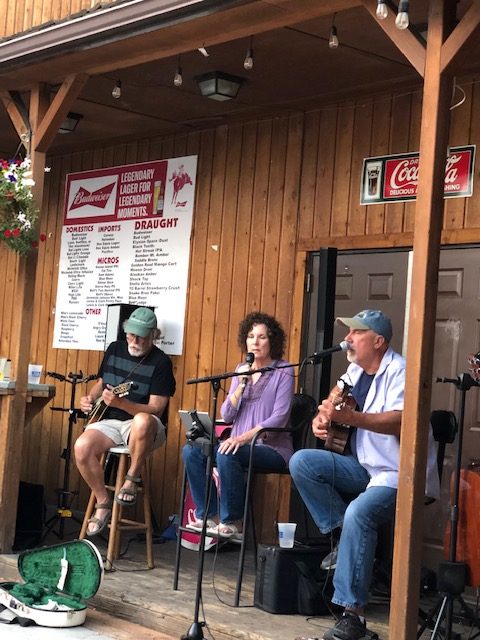 While at Buffalo Bill State Park, a fire broke out in Yellowstone, not far from the east entrance of the park. Unlike California, they let fires burn. It was a bit disconcerting for Kathy and me, but the locals told us this was normal . . . that is, until the fire came closer and closer to the campground. Then the entire fire team set up camp in the day use area of the park, which became their incident command post. A makeshift helicopter pad was situated in front of Fred and Sandra’s hookup site high up on a hill outside the park. 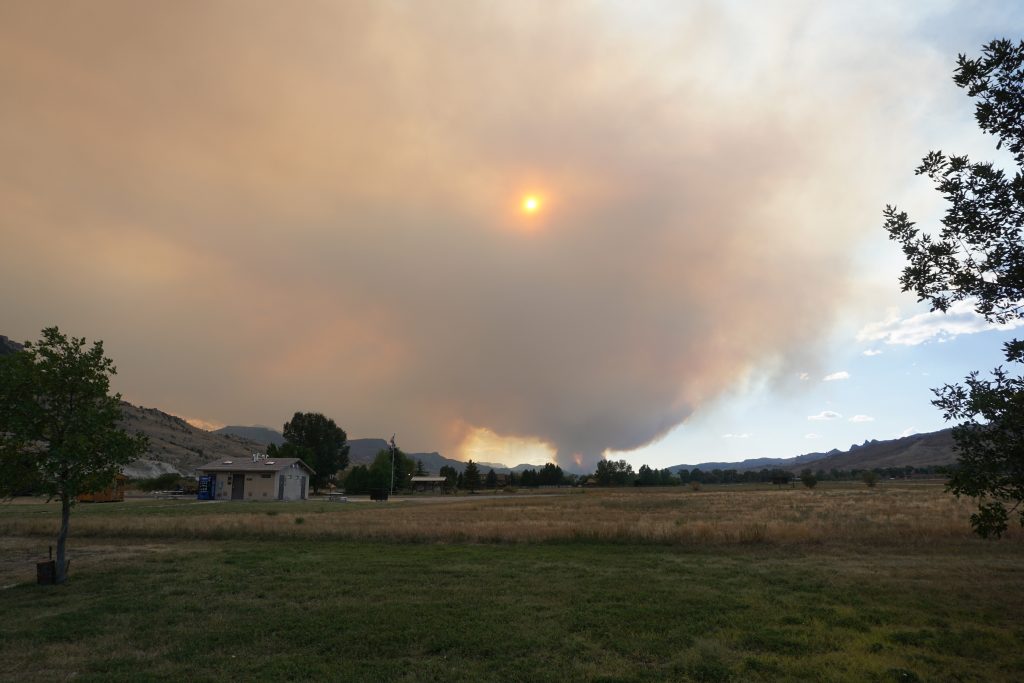 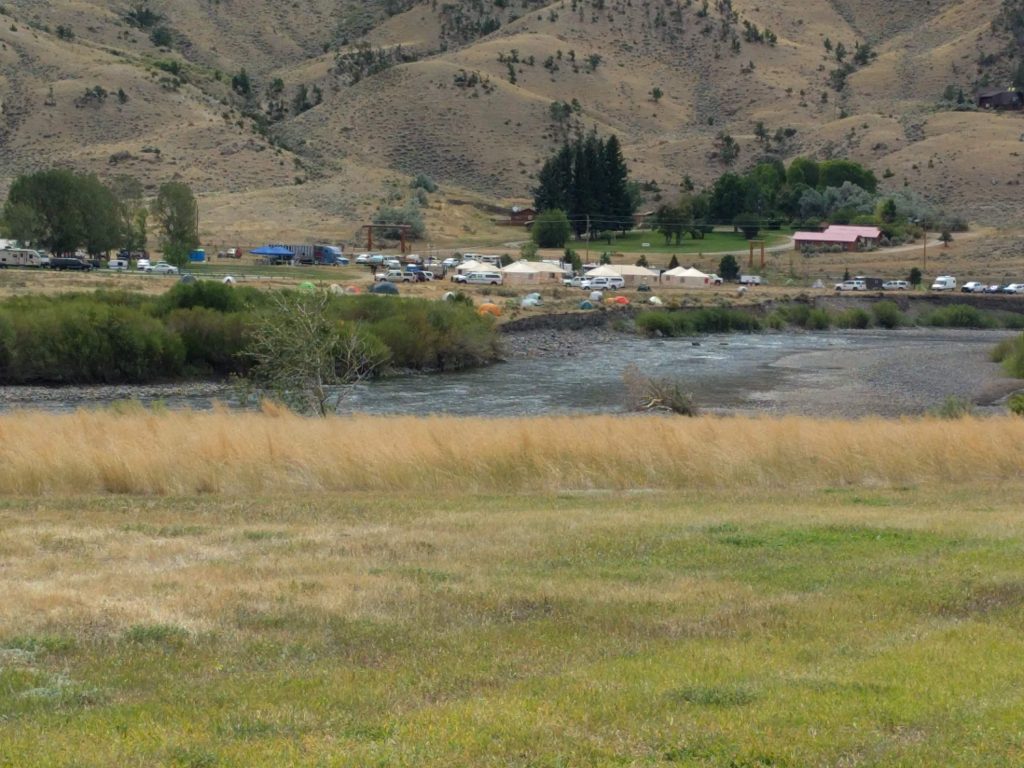 Because we had extra time in Cody, we decided to take another drive into Yellowstone, but this time we took the Beartooth Highway, a 68-mile National Scenic Byway, which winds its way through southwest Montana and northwest Wyoming and leads into Yellowstone National Park at its Northeast Entrance. The Beartooth Highway opened to automobile traffic in 1937, and there aren’t enough superlatives in the English language to describe its beauty. 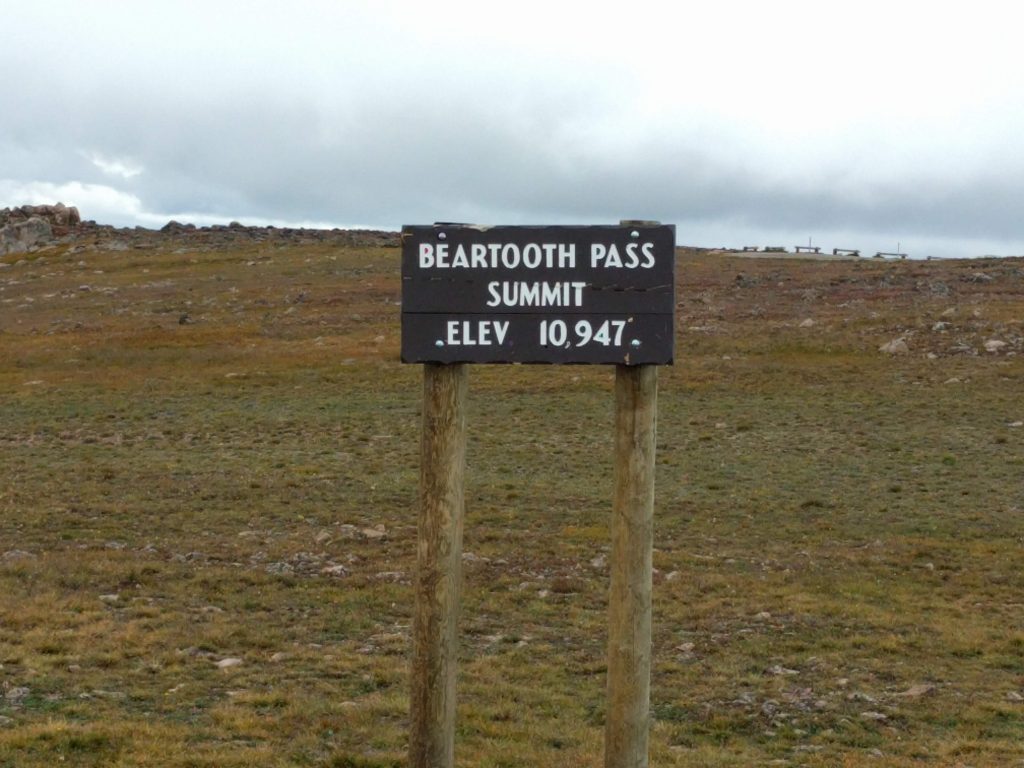 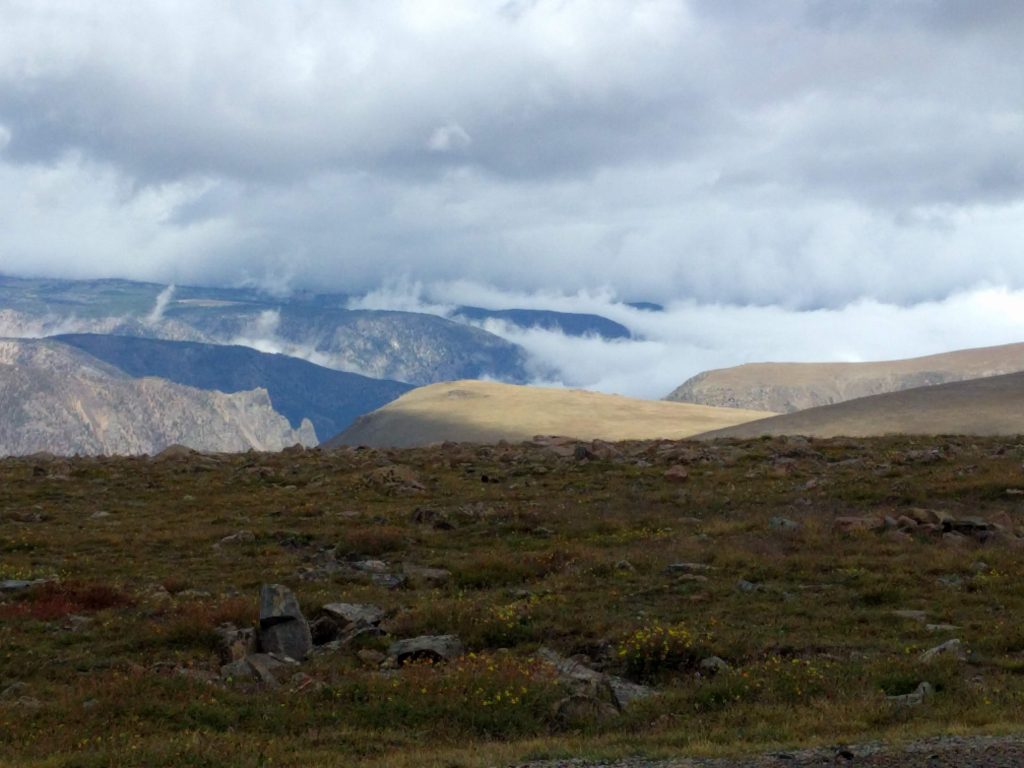 We spent some time in the quaint town of Red Lodge, Montana, and ate brunch at the Wild Table. Fabulous! We felt fortified and continued our journey into Yellowstone, where we saw herds and herds of buffalo. This is what I call a Buffalo Jam as opposed to a Bear Jam, which I’ve experienced in the Tetons. We waited in “traffic” until this mama finished nursing her calf. 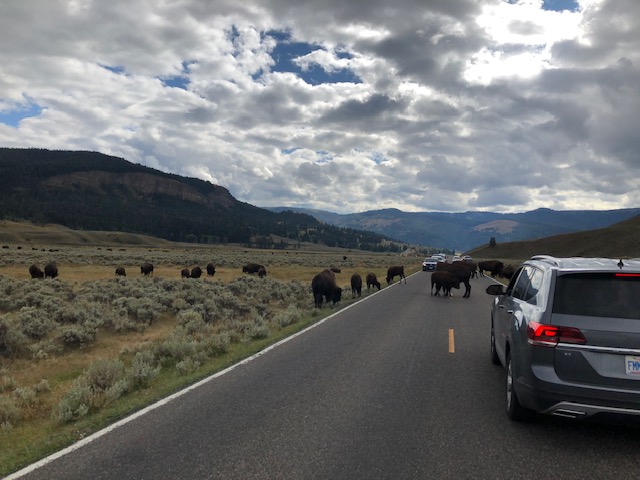 On the way out of Yellowstone we took the Chief Joseph Scenic Byway, aka Wyoming Highway 296, which follows the route taken by Chief Joseph as he led the Nez Perce Indians out of Yellowstone National Park and into Montana in 1877 during their attempt to flee the U.S. Calvary and escape into Canada. This drive became the ultimate white knuckle experience. We left Yellowstone before dark and wound our way through the rolling hills and stunning views of this 45-mile jaunt. Soon we began to climb and climb and climb. It was getting dusk when we hit fog, and I couldn’t see a foot ahead of me. Then it got dark and we were still climbing and winding (I mean some hairpin turns!) when I put on the flashers of my Roadtreak and crawled about 10 miles per hour for well over 10 miles with traffic behind me.

My vocabulary at this point became F-F-F. When we finally got below the night fog, pick up trucks hauling horse trailers began to pass us. I let out a big sigh of relief! Then, my co-pilot, Kathy Moran, told me that she’d been holding an angel clip with the saying “Protected by Angels” that she’d been using it ever since she got her Winnebago. “So far so good,” she exclaimed!

Next stop Thermopolis, Wyoming! I’ll be covering that in a future post. In the meantime, let us know about some of your white knuckled adventures here.

Safe travels and keep on truckin!