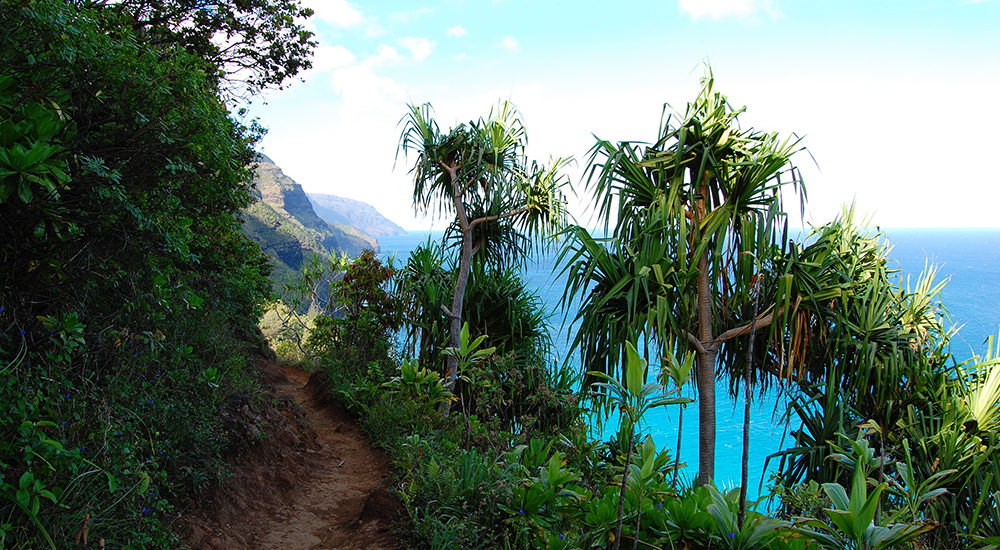 There are certain adventures in life that change you. Without a doubt hiking the 22 mile roundtrip Kalalau Trail in Kauai leaves an impression unlike any other. It’s left such an impression on Gourmet Girl Lindsey Moran, that she’s returned twice since her first time hiking the trail in 2006. She has every intention of making the journey many more times to come. Here’s her story, we hope you enjoy it as much as we do!

The Kalalau Trail is routinely rated as one of the most dangerous hikes in the world, and also as one of the most beautiful. It ranks at number 14 for the world’s best hikes according to National Geographic, but beauty often comes with a price. It’s 4,000 foot sheer cliffs, potential for raging rivers and hazardous surf rank it at number 9 for most dangerous according to Outside Online. Even though you travel from sea level at the start to sea level at the end, the 5,000-10,000 foot elevation gain, depending on your source (there seems to be no consensus), also rates this as one of the most difficult trails in the US.

Traversing on foot through a dozen cliffs and valleys along Kauai’s Na Pali coast I found myself contemplating the beauty and fragility of life. Every valley holds it’s own tiny ecosystem, and every cliff it’s own rocky reminder, hundreds of feet below, to keep both feet on the trail. I like to camp out the night before hitting the trail at nearby Ha’ena State Park. It’s a good way to double check all my gear and get into self-reliance mode.

The 11 miles to Kalalau Beach and campground takes me roughly six hours depending on physical fitness and weather conditions. I try to hit the trail as early as I can without stressing myself out too much about it. The first two miles between Ke’e and Hanakapi’ai Beaches are strewn with day hikers on a mission to experience what they can of the trail, without having to commit to multiple days and 25 pounds of gear on their back.

Taking a dip at Hanakapi’ai Beach is tempting, and even more so after the grueling 600 foot climb from the parking lot. However, signs as you descend to the beach warn of treacherous waters at Hanakapi’ai that have claimed many lives. Indeed it’s a great place to put your feet in, but I’ve never dared to go any farther.

Immediately upon leaving the tourists behind on the beach, the trail starts to feel different. The 800 foot climb up to The Gate, or Space Rock depending on who you ask, is narrower and much less frequently traveled. With every new step it feels like civilization is one mile further away. Before I knew what this point was called I had named it Snack Rock. After the first three miles of the trip, which include two of the most grueling climbs, it’s time to chill for a minute and have a bite.

The views from this section are some of the best along the entire trail. You can see the path ahead meandering through valleys and around mountains, waterfalls cascading down 4,000 foot cliffs, whales breaching in the pacific, and picturesque Hanakapi’ai Beach 800 feet below. It would be tempting to stay here, if only there were a little more real estate. There’s barely enough flat ground for a couple of butts to rest let alone a tent.

The next three miles to Hanakoa Valley are fairly easy, well, at least compared to the rest of the trail. There’s only about a 1/4 mile of the entire trail that could be considered flat. In this section the mind tends to wander as you pass through valleys, cross streams, and round cliffs. Wildlife starts to become abundant as you near Hanakoa. Wild boar, goats, and a type of African partridge called an Erckel’s Francolin are common sights rooting around in the jungle. One time a group of goats came running full speed down the hillside, crash landed on the trail in front of me, and then kept right on going down the hill. I was thankful they were 100 yards ahead or they would have taken me down the hill with them!

Once you reach Hanakoa you’re likely to find a few other hikers who have pitched tents at one of the area’s campsites, sat down for lunch in one of the picnic shelters, or are using the self-composting facilities. This (roughly) halfway point is where I usually recharge too. Refilling at the streams is definitely the best way to get water. However, you should always bring some kind of purification as the streams can contain leptospirosis. There’s a beautiful waterfall about 1/2 a mile up the Hanakoa Valley from the campground. I’ve made the trek twice. The trail isn’t very well kept, and it adds one mile round trip. Unless you’re running ahead of schedule, it’s best to keep going. Getting set up at Kalalau Beach in time to watch the sunset is worth it.

About a mile and a half after Hanakoa you’ll run into the infamous Crawler’s Ledge. A barren stretch of narrow trail with nothing but cliff above, and cliff below. To make matters worse, the wind can rip through this area. Anyone afraid of heights ends up on all fours literally crawling through this section of trail, giving it it’s ominous name. The image I snapped here doesn’t really do it justice. At it’s most terrifying, the cliffs are much steeper above and below. The first time I hiked this section I was blissfully unaware of both it’s name and it’s infamy. It was extremely windy, but I simply and carefully placed one foot in front of the other and had no troubles at all. But the hard truth is, I’ve been lucky. There are videos of people who’ve reached this stretch during a downpour and appear to be clinging to the cliffside for dear life. In wet conditions small rocks can release from the cliffs above and the tiny trail becomes slippery. Not exactly a walk in the park (although technically it is a walk in the Na Pali Coast State Park). I’ve been caught in a downpour somewhere along the trail every time, it’s almost impossible not to. Northern Kauai is considered one of the wettest places on earth, with an average rainfall of 460 inches per year. The way I see it, getting rained on while crossing Crawler’s Ledge is only a matter of time. But I’m not going to let that stop me.

It’s a few more miles to the area called Red Hill and your first view of the Kalalau Valley. However, it’s a bit deceiving to think you’ve arrived. The sign is still about a mile and a half from the end of the trail. Some campsites are available when you first descend into the valley, but in my opinion the best ones are at the very end. Next to the waterfall / communal shower that comes equipped with it’s own soap bar holder carved straight out of the rock.

It’s easy to see why some people come here and never leave. Time no longer matters. You eat when you’re hungry, make a fire when it gets dark, sleep whenever you’re tired, and generally do whatever the hell you want. Entertainment becomes relative. My friend Anne and I found ourselves entranced by a group of large silver fish (perhaps Swordfish) jumping way out in the Pacific. One time I watched as an entire volleyball team full of guys decided to take their shorts off, right there on the beach, and frolic around in the waves. Buck naked. I mean… I wasn’t about to tell them to put their clothes back on!

With all the scary articles out there, researching the trip online can overwhelm people with fear. Having hiked the trail three times, I can tell you it isn’t nearly as scary as everyone makes it out to be. Sure, people have made mistakes. But out of the hundreds of thousands of hikers that make the trek every year, it’s only a handful that don’t return. The vast majority of fatalities are due to the poor choice to cross a river after a downpour. It’s not hard to get swept away into heavy seas. The simple way to avoid this; always bring a couple of days worth of extra food and camp out until the swollen river returns to normal.

The people I ran into along the way are from all walks of life. Working professionals like myself looking for an adventurous getaway, trail runners who manage to do the entire 22 mile round trip in one day (insane), naked hippies who have made the Kalalau Valley their home. All are kind and generous souls who appreciate and respect the beauty here in their own way. It’s hard to find anyone who isn’t in complete awe of the experience no matter how many times they’ve seen it.

Hawaiian culture runs deep along the Na Pali coast. Anyone found disrespecting the land will get in trouble with both the locals and the authorities. Ancient Hawaiians lived in the valleys creating terraced land with low rock walls to grow taro. I’ve seen a few along the way, and I’m told there are many more farther up the Kalalau Valley. The entire Na Pali coast is considered sacred among Hawaiians and is protected as the 6,175 acre Na Pali Coast State Park.

The hike back always seems faster than the hike there, and I suspect it actually is easier. The uphill climbs are more gradual going the other direction. And you’ve got all those naked people you met along the way to keep your mind off things. Now familiar landmarks seem to pass by quickly, hitting one after the other after the other. “Oh, there’s that stream I refilled at on the way here. There’s that stump that looks like it has a penis. There’s the smelly dead goat. And there’s that awesome view of Hanakapi’ai Beach.” Then suddenly you’re back at your car wondering why you didn’t just stay.

P.S. While this trail required dehydrated food, I don’t recommend it for anything besides backpacking. Pick up your copy of The Gourmet Girls Go Camping Cookbook at www.gourmetgirlsonfire.com/shop to make sure your camp food doesn’t suck!

For anyone interested in delving deeper, here are some helpful resources: