Gourmet Girl Gail here writing from Santa Barbara. A couple of weeks ago, Kathy Moran, Kathleen Murphy, and I headed over to Live Oak Camp to join 120 Sisters on the Fly for Live Oak Stampede. Live Oak is very close to my home, only about 40 minutes from S.B., off the 154. Until recently it was the venue for the Live Oak Music Festival, which takes place every year around Father’s Day, but it’s been moved up to San Luis Obispo (SLO). I only attended the festival once, and it was very hot and dusty. Music was played all night long in surrounding tents. It was a fun time, but as I say, “Been there, done that, and I don’t need to repeat!”

This is the first time we three Sisters have attended Live Oak Stampede, a widely touted event, which sells out in a nanosecond each year. Now we know why! We arrived early and waited in line with many types of rigs, including “Gone with the Wind,” my Roadtrek. 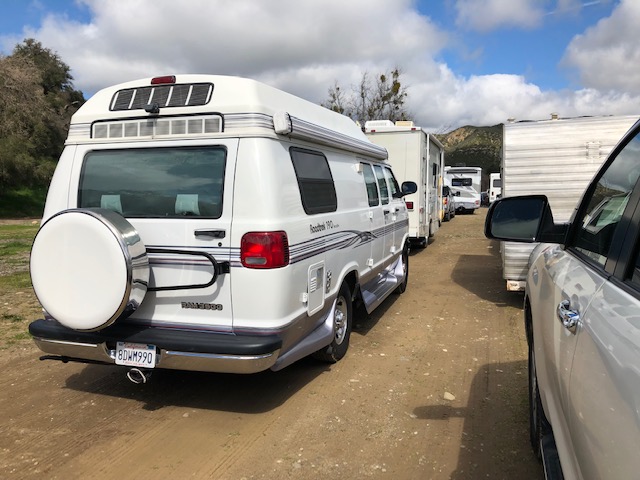 I really do need to do something fun with the external spare tyre on the back. Maybe a cover with stenciling? Or something like this one I found on Amazon. Or a crocheted cover like this? Perfect for this vintage trailer! Any and all ideas are welcome, and you can post them here.

Here we are being greeted by the welcoming committee with a bottle of old-fashioned Jackson Hole Snake River sarsaparilla. They were also offering a shot of whiskey for any takers. I took a rain check on that knowing it would be a long evening ahead. The activity schedule said AAA (show up in the pavilion at 5:30 pm wearing an apron, carrying an appetizer, and packing some alcohol). LOL! Later that evening they showed a movie, “Cowboy and the Senorita.” 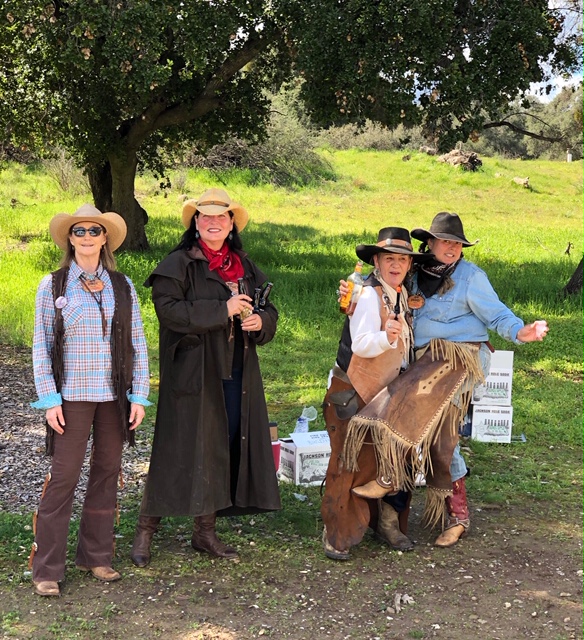 And here we are being signed in at the cowgirl check-in. The next step was to park our rigs and let the fun begin! 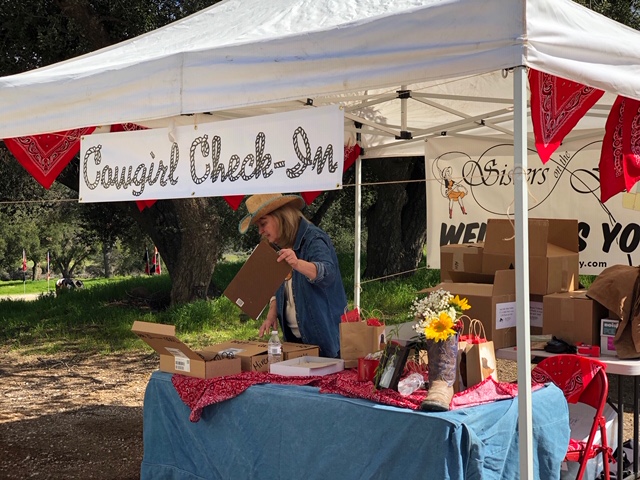 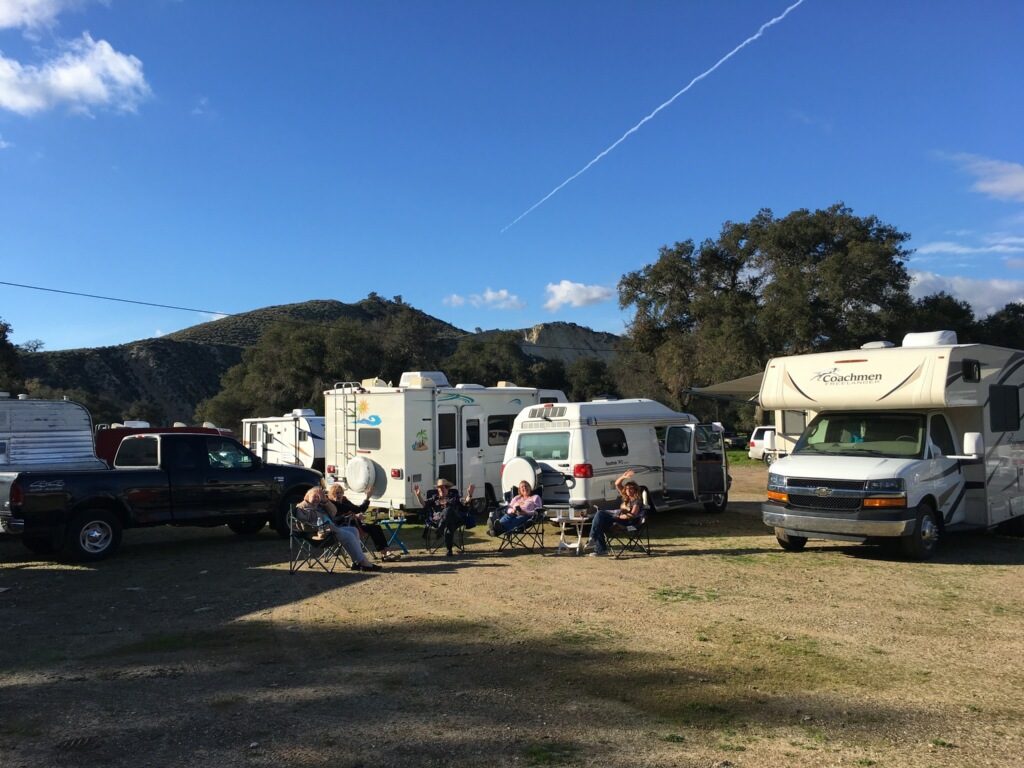 A quick tour around the environs showed some exceptional decorating on the part of the organizer and hostess, Jo Tarkington, and her helpers. Hey, even cowgirls can get fussy about their restrooms! 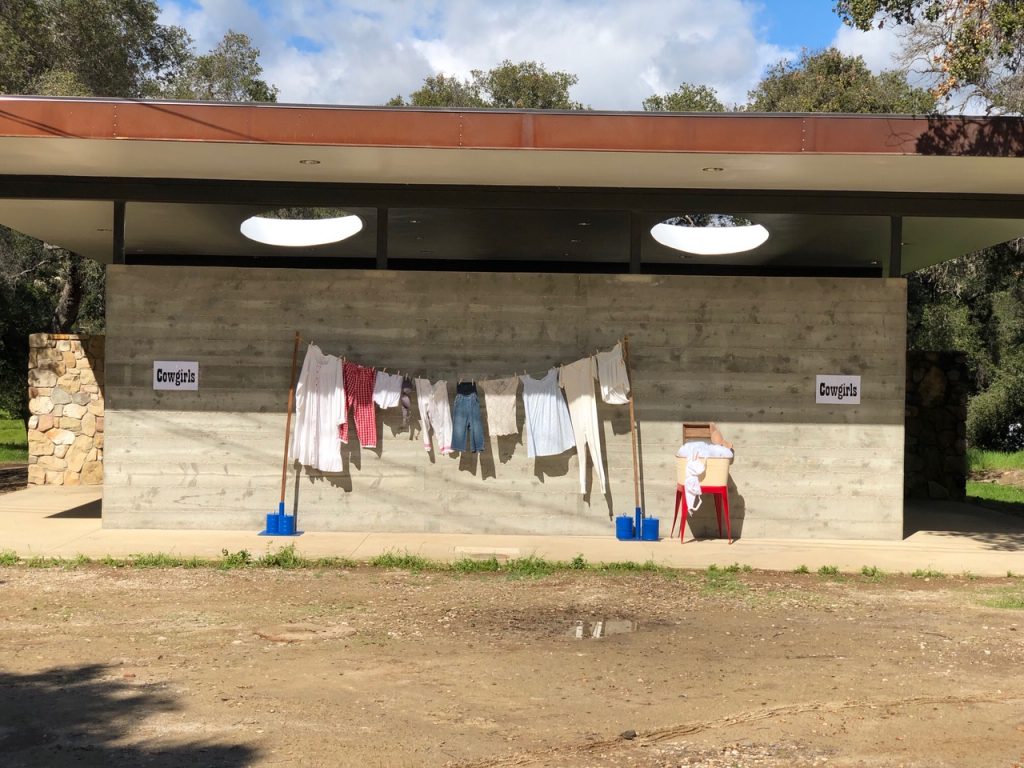 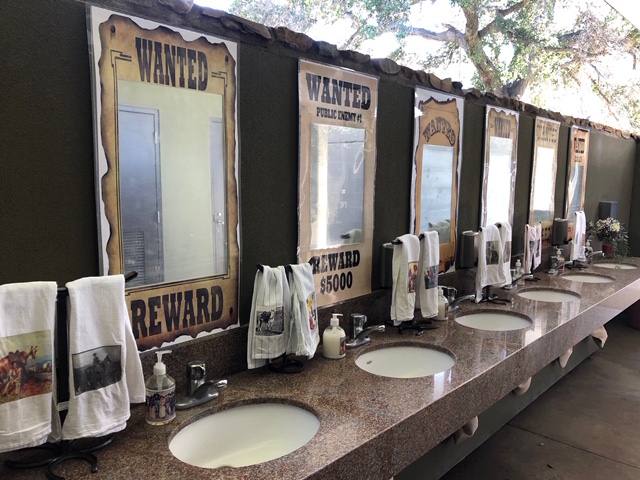 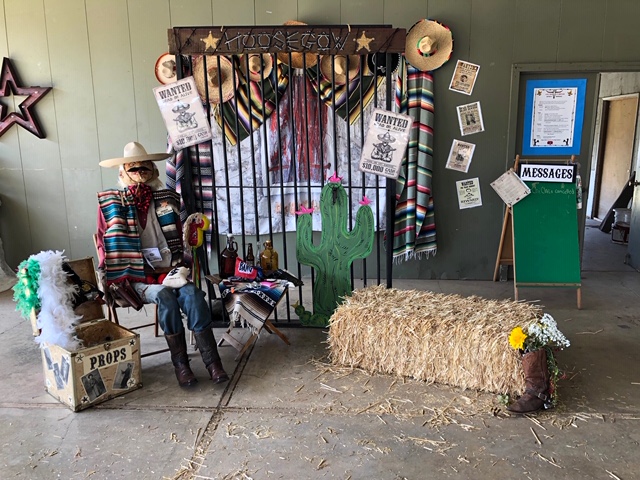 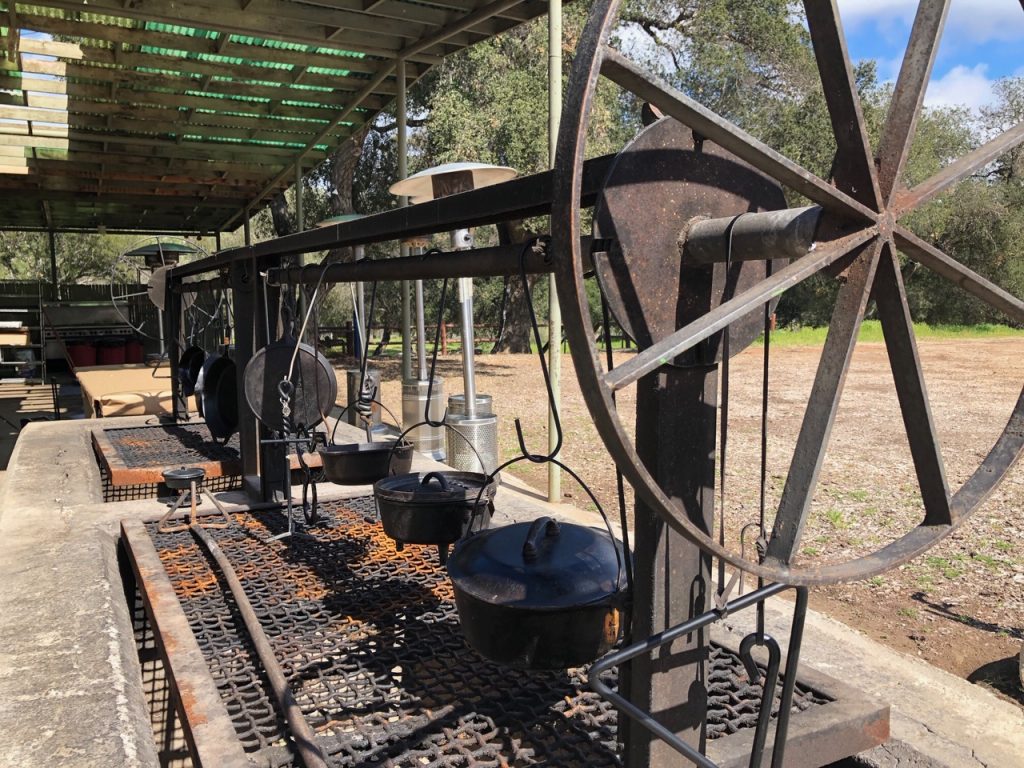 One of the events that took place the next day was called the Stick Horse Rodeo. What a hoot! Kathy, Kathleen, and I are already thinking about our stick horses for next year. We didn’t have a clue what this was all about until we strolled over to watch what was happening. 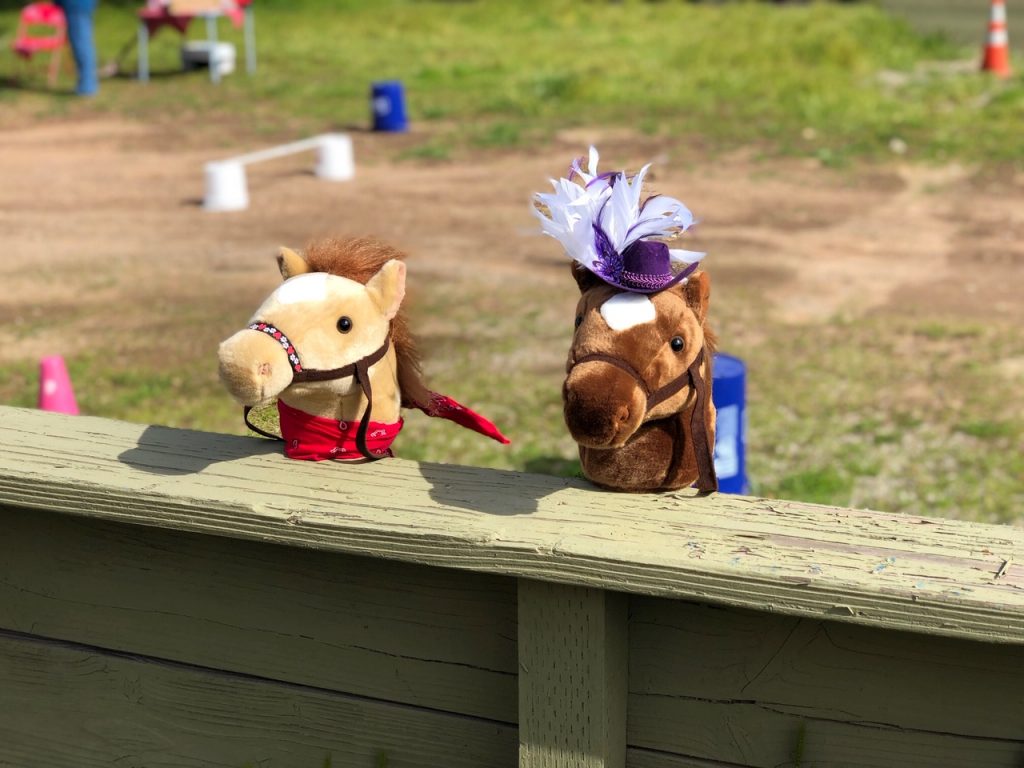 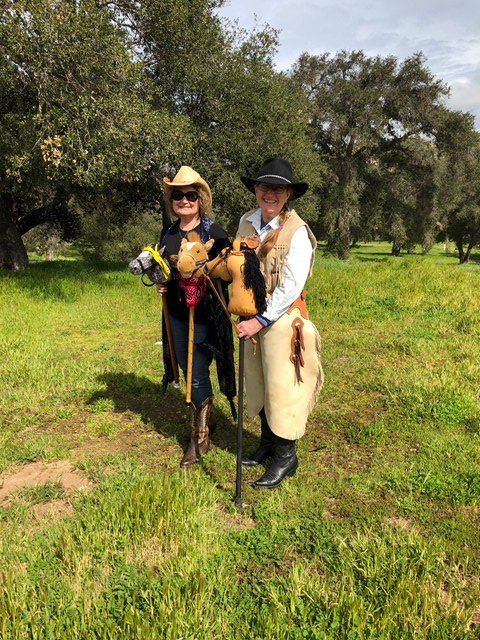 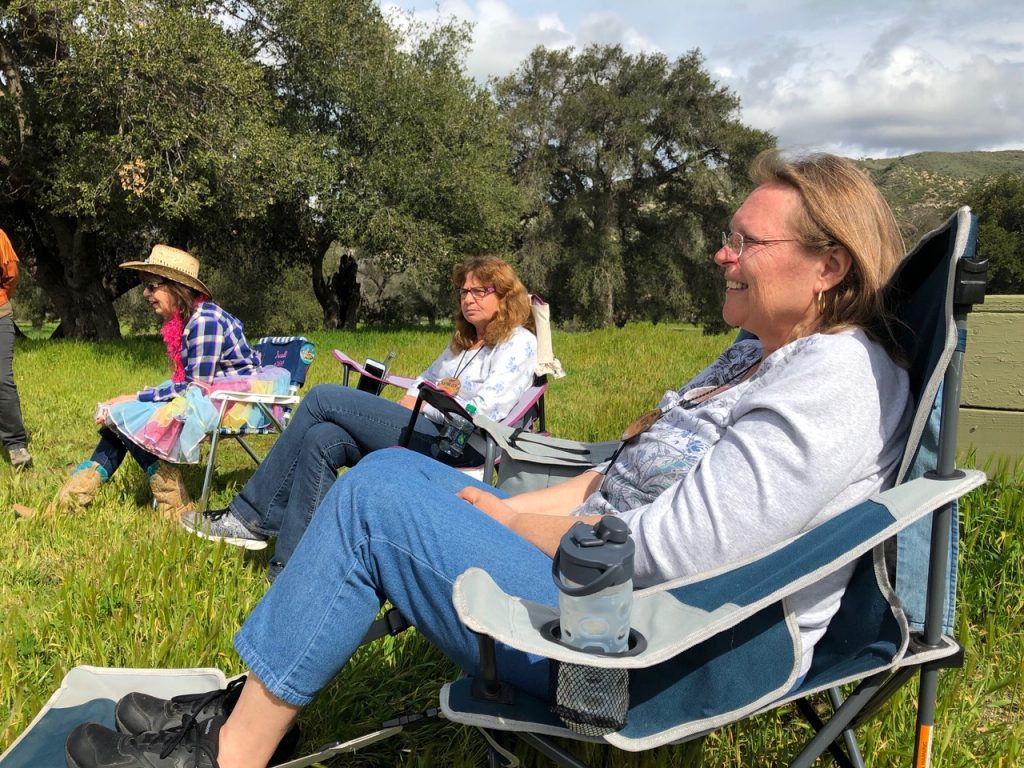 Saturday morning breakfast was a Dutch Oven feast (“Cowgirls in Pajamas”). I had to hand it to the gals who got up early to take part in this affair where everyone was invited to chow down. Below is Kathleen Murphy, a first-time Dutcher! We’ve got a slew of dutch oven recipes in the Gourmet Girls Go Camping Cookbook. I recently made our Bison Chili and Chicken Marbella out at Refugio State Beach, so I’ll definitely participate in the Dutch Oven “Cowgirls in Pajamas” breakfast next year! 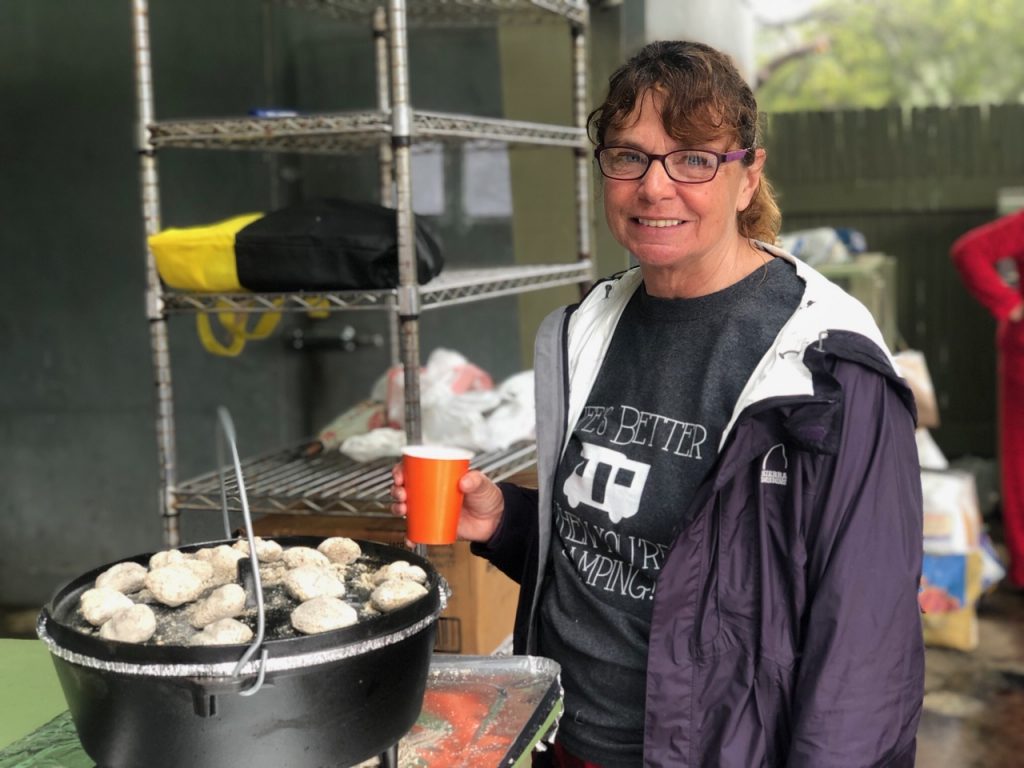 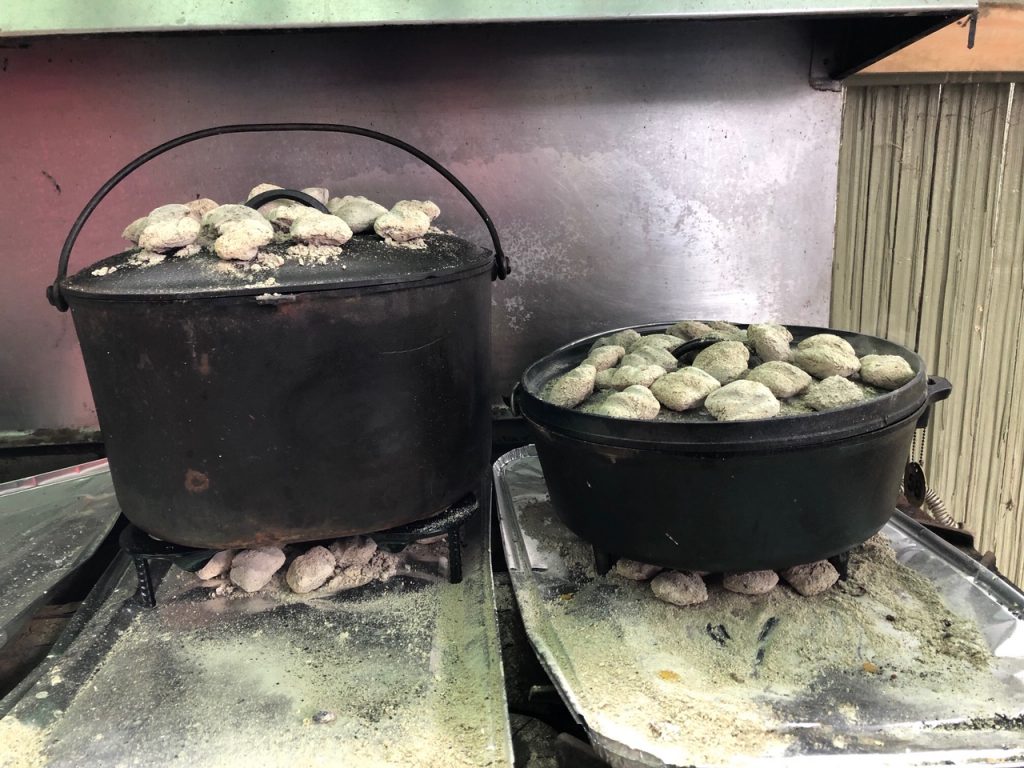 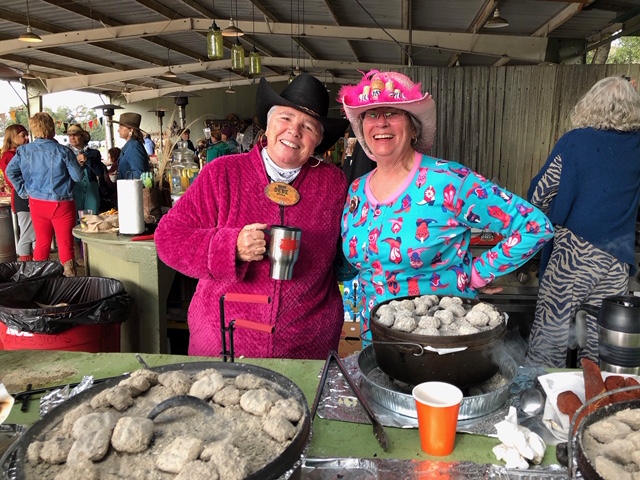 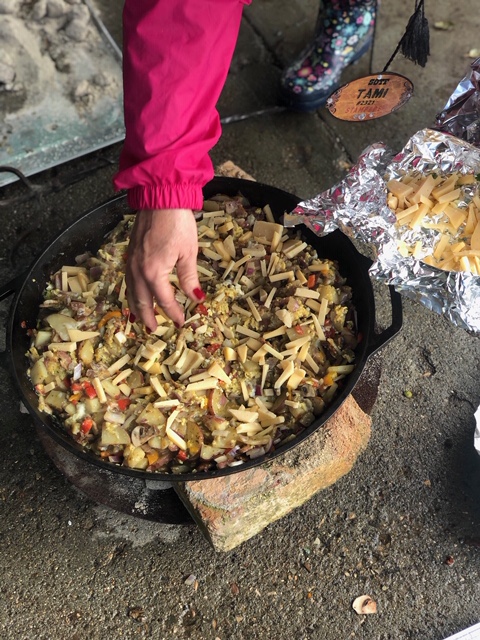 Our last evening brought on a lively Cowgirl Hoedown with a live band from Los Angeles called the Magnolia Drawl. I just learned today that the band wrote and plays a sound track in the new Nancy Drew movie coming out this weekend. Are you kidding?? I read every Nancy Drew book in the original series when I was a kid, all 56 of them. I even wanted to become her! I remember being about 12 years old, sitting on the steps of Vermont College in Montpelier (an all girls school at the time) writing in a leather bound journal. One of the students passing by asked what I was writing. I told her I was writing a mystery book. Seriously, I can’t wait to see the movie!

Even though I didn’t have the cowgirl duds a lot of the other women wore, I did bring my cowgirl hat. I bought it in New York City at the Stetson hat store on 33rd Street and Broadway. It was right after the movie Midnight Cowboy came out. And it’s only got one little moth bite in it. I’m still into being a cowgirl now and then, so you can bet I’ll be working on my stick horse moves sooner than later! 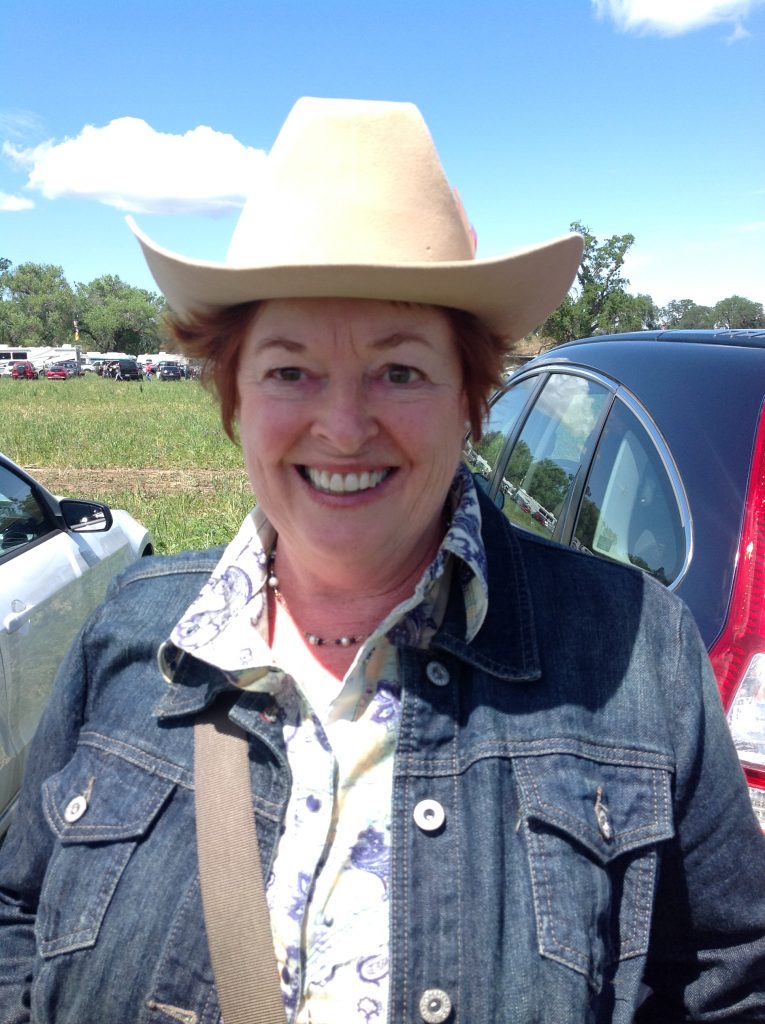 I’ll bring an end to this post with a detail from another Sisters on the Fly vintage trailer. It’s really priceless. There are so many wonderful, creative Sisters. I’m honored to be Sister #8516! I think we’re up to more than 12,000 at this point. 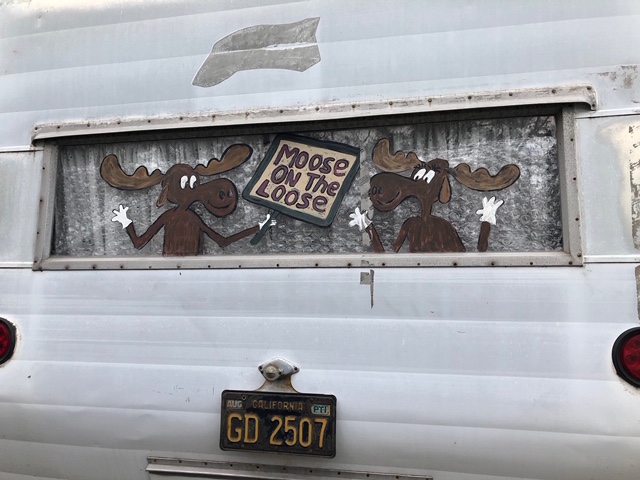 Happy trails! Until the next time we saddle up together, take care.